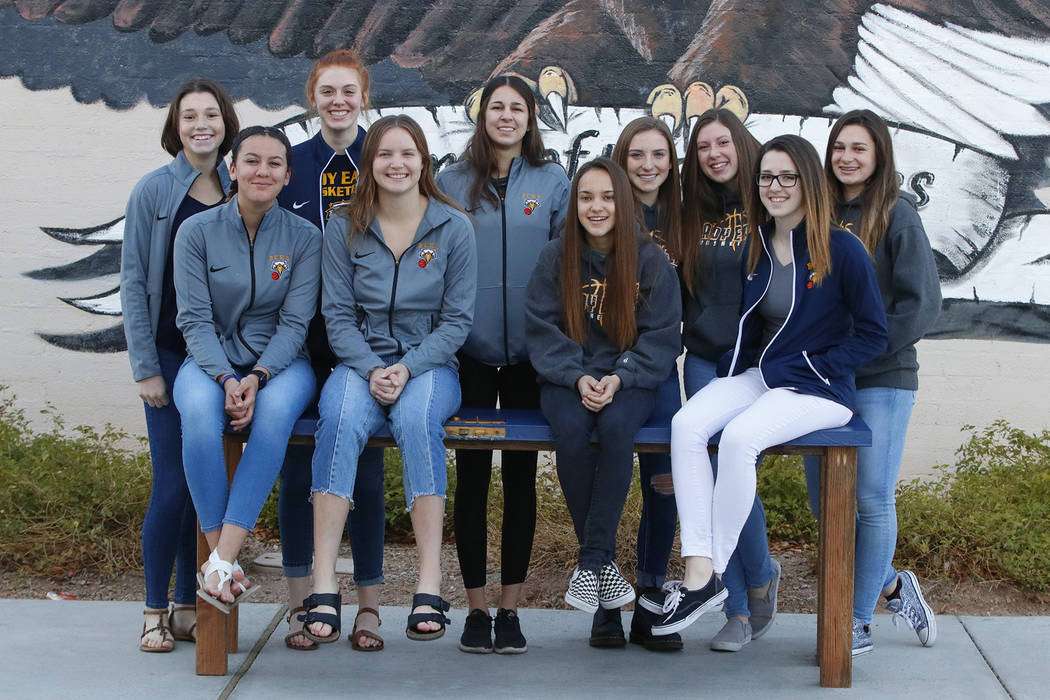 File Members of Boulder City High School's girls basketball team, front row, from left, Kailee Fisher, Jerra Hinson, Keely Alexander, Hannah Estes; back row, from left, Natalie Bowman, Ellie Howard, Setia Cox, Madison Manns, Abby Giunta and Sophie Dickerman sit on a table made from a door taken from one of the old buildings on campus before it was torn down. The door was sold during an event Feb. 6 that raised $5,200 to benefit coach Paul Dosch, who is battling lung cancer.

Gaining contributions from their offense when they needed it most, Boulder City High School’s flag football team defeated Chaparral 25-12 on Feb. 8 to capture the last playoff seed in the 3A Sunrise League.

Concluding the regular season with an 8-7 record, the Lady Eagles have extended the program’s streak to five consecutive seasons with a winning record and postseason appearance.

“We had a really good week and everything kind of clicked for us offensively against Chaparral,” head coach Kevin Ruth said. “The girls knew they didn’t want to be the first team to end the playoff streak, so they came out and played hard.”

Senior quarterback Nicole Valle was at her best against the Cowboys, completing 7-of-14 passes for a season-high 183 yards and three touchdowns.

Despite struggling, sophomore quarterback Makaela Perkins threw a touchdown pass as well, completing 3-of-10 for 39 yards.

Boulder City will travel to Cheyenne tonight for their first-round matchup.

Falling short of repeating as Class 3A champions, Boulder City High School girls bowling team fought hard, losing to The Meadows 1,559-1,507 at The Orleans on Feb. 7.

Despite rallying by 40 pins in the third and final game, the Lady Eagles weren’t able to make up a 59-pin deficit after the game.

Sophomore Christine Smith bowled 446, leading all bowlers with a high game of 158 in her third match.

Bowling a 157 in her third match, senior Bailey Bennett-Jordan concluded her prep career with a final score of 435.

Boulder City High School girls basketball team was sent home Tuesday, Feb. 13, by Mojave senior guard Kiara Lemon with a 50-48 loss in the first round of the 3A Southern Region playoffs.

Entering the fourth quarter with a 37-30 lead, the Lady Eagles were outscored by the Rattlers 20-11 in the fourth quarter, highlighted by a pair of game-winning free throws from Lemon with 6.2 seconds remaining.

The third-seeded Lady Eagles broke the game open with a 16-8 second quarter run before running out of gas down the stretch during the game at Mojave.

Graduating only Hinson this season, the Lady Eagles are seen as a team on the rise., especially since nearly upsetting the second-seeded Rattlers on Tuesday.

“It was amazing how this community steps up,” Dosch said. “For all of the people who helped, donated money, time, items. We are very humbled. I want to thank the school administration and Mrs. (Heather) Blumenthal, Mrs. (Mary) Hinson and Mrs. (Kristen) Estes. I know I’m missing many people. Grateful would be a understatement.”

A trio of basketball moms — Blumenthal, Estes and Hinson — helped organize the event that featured a bake sale, school apparel and home decor. Historical furniture from the original high school building, such as doors turned into tables and chairs from the theater, were also available.

“This event was great,” Blumenthal said. “We were able to involve the entire school, giving everyone an opportunity for service. We had donations from just about every sport and club at Boulder City High. Everyone wanted in knowing all proceeds benefit the Dosch family.”

Raising $3,200 from sales, an anonymous donor contributed with $2,000 to put the Eagles’ effort over last year’s total.

“Just when we thought things were going great, an anonymous donor approached us with a challenge to raise at least $2,000,” Blumenthal said. “They said they would match the effort and did. It was a group effort by every single person in that gym that night.”