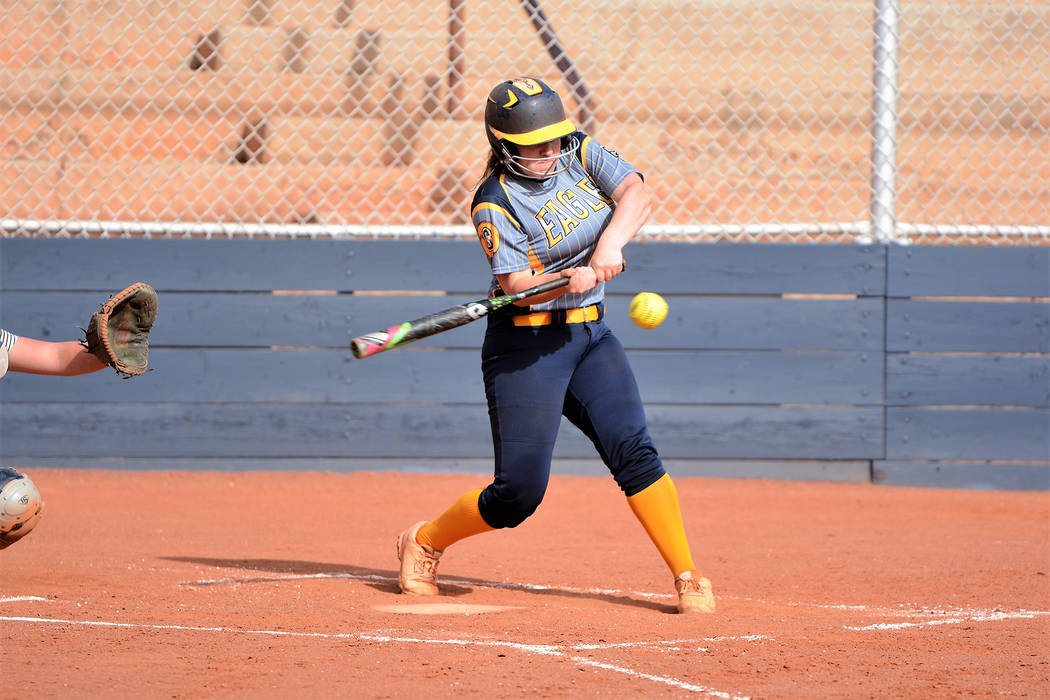 (Robert Vendettoli/Boulder City Review) Boulder City High School senior Marleena Mills, seen getting a base hit against Bonanza on April 8, went 1 for 4 in the Lady Eagles' 10-1 victory over Virgin Valley on April 10.

Ending a two-game skid, the Lady Eagles accumulated 11 hits, highlighted by 4 for 4 performance from senior Ryann Reese. Hitting a double and triple, Reese drove in a pair of runs.

Freshman Alyssa Bryant finished 1 for 1 with a pair of runs batted in. Driving in a run apiece, sophomore Rose Mackey finished 2 for 3, while senior Marleena Mills finished 1 for 4.

On the mound, senior Abby Giunta picked up the victory, striking out four batters in six innings.

The Lady Eagles will resume play at home against Chaparral on Tuesday, April 23.

Finishing behind the host Vikings, the girls trailed by 5 points with a team score of 65 points, while boys accumulated 40 points to Valley’s 90.

Leading the way for the Lady Eagles, sophomore Chloe Payne finished first in the 100-meter and 300-meter hurdles and second in the triple jump. Senior Erin Cowley placed first in the discus and shot put.

Also finishing first for the Lady Eagles were freshman Mary Henderson, who won the 800-meter and 1600-meter run events, and senior Taylor Cunningham, who won the high jump.

The Eagles had four golfers in the top five, with sophomore Blake Schaper leading the way with a score of 73 on the par-72 course.

The Eagles will resume play May 1 at Coyote Springs.