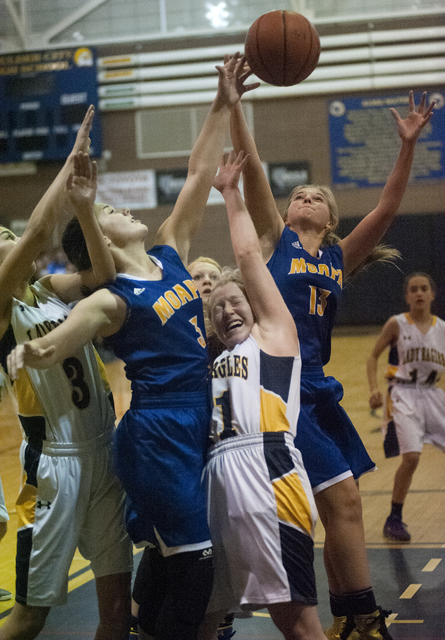 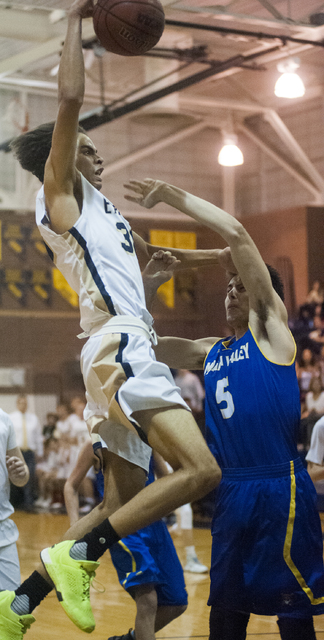 Steve Andrascik/Boulder City Review Senior Justus Green of Boulder City High School goes up for 2 points in the home game against Moapa Valley on Friday. Green scored 8 points to help win the close game for the Eagles. Boulder City put 61 points on the board compared to 55 by Moapa.

Securing a playoff berth after a one-season hiatus, the Boulder City High School girls basketball program split its final two games of the regular season, defeating Chaparral on Feb. 8 and losing to Moapa Valley on Friday.

Slashing her way to the basket, freshman guard Keely Alexander scored 7 points, including a second-half layup on which she was fouled and converted to a three-point play.

The Lady Eagles were unable to duplicate the result against conference rival Moapa Valley, as the Pirates cruised to a 53-32 victory behind double-digit efforts from Kaitlyn Anderson (14 points) and Lainey Cornwall (13 points).

Alexander led the way for Boulder City with 10 points, while Cox scored 7. Worrall and Manns scored 6 and 5 points, respectively.

Finishing third in the 3A Sunrise League standings, the Lady Eagles traveled to Desert Pines on Wednesday for the first round of postseason play. Results will appear in next week’s issue.

Despite ending the season with a 61-55 victory over rival Moapa Valley, the Boulder City High School boys basketball program missed the postseason for the third consecutive season.

Edging out the Pirates in their last home game, the Eagles rallied from a 35-25 halftime deficit behind strong second-half efforts from sophomore guard Karson Bailey and junior forward Clayton Pendleton.

Hitting on six of his eight 3-point attempts, Bailey led all scorers with 24 points. Serving as a specialist on defense as well, he also grabbed a pair of steals.

Pendleton was also clutch toward the end, scoring 9 points, including making three of his four free-throw attempts in the second half.

Finishing what was a brilliant senior season, senior forward Justus Green was crucial down the stretch, scoring 8 points with nine rebounds, four assists and three steals.

Although they were unable to obtain a victory against undefeated conference leader Chaparral on Feb. 8, the Eagles gave the Cowboys everything they could handle, losing 63-60.

Bailey, who blossomed into a star during the final week, led the way in scoring against the Cowboys as well, connecting on 6-of-9 from 3-point range and finishing with 26 points, three assists and three steals.

Junior guard Carson Balistere also had a solid outing from 3-point range, connecting on 4-of-9 to finish with 12 points and adding four rebounds.

Bailey led the Eagles in scoring for the season with 12.2 points per game, while Balistere averaged 11.2 points and Green chipped in 10.4.

Time ran out on the Boulder City High School boys bowling program Feb. 8 at The Orleans, as the Eagles fell 2,124-2,116 to 3A state runner-up Chaparral.

“If we had just a few more frames, I believe we would have pulled it out,” head coach Rodney Ball said. “We had them on the ropes late; momentum was really turning to our side.”

Trailing by 12 pins heading into the final game, senior Connor Armstrong bowled his best in crunch time, cracking the 600 mark for the second consecutive game with a 602 against the Cowboys.

“I have never seen someone play so above themselves when it mattered most,” Ball said. “To his credit, Connor did everything we needed him to. He bowled like a champion for us.”

Also at his best, senior Ed Rassuchine led all bowlers with a high-game of 212 in the second match and totaled 595 pins on the day.

“It was a great season,” Ball said. “Graduating three seniors, the future of our program looks uncertain right now, but somehow we always manage to bounce back. We’ll try to continue the dynasty next season.”