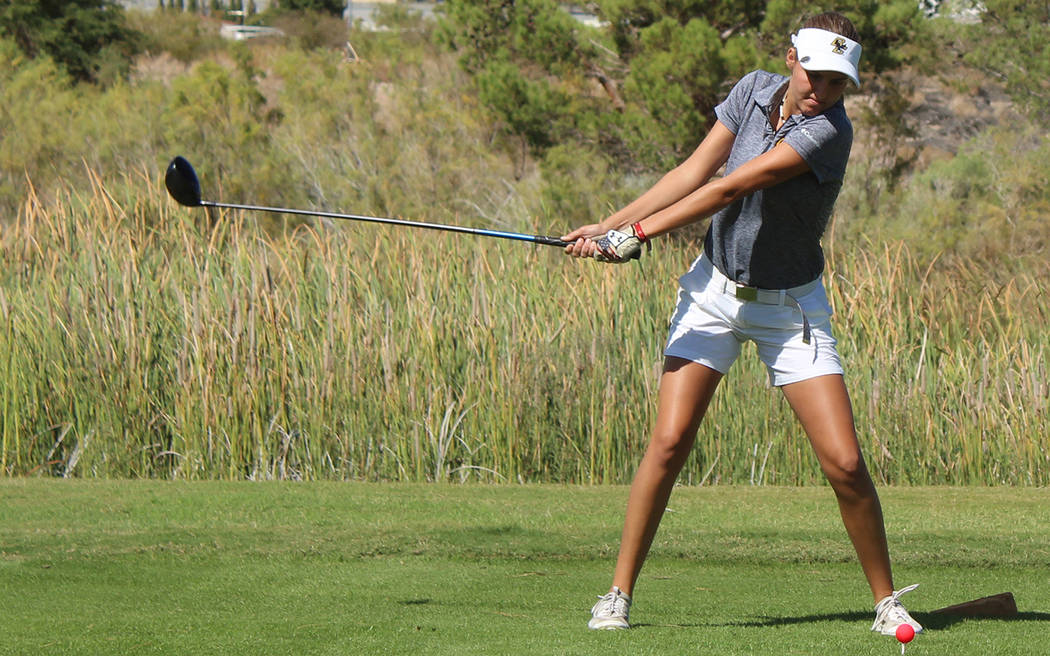 Finishing with a team score of 374, the Lady Eagles trail only Pahrump Valley (367) heading into day two.

Doing their best to defend their 3A state championship, senior Ryann Reese finished third after day one with a score of 86, while juniors Sydney Krumm and Makaela Perkins are each tied for fifth after shooting 94.

Placing all four golfers in the top 10, sophomore Riley Shuman is currently slotted in ninth place after shooting 100.

Complete results from the 3A Southern region tournament will appear in next week’s issue.

Sophomore Sophie Dickerman finished with an overall time of 23:17, in a tie for sixth place, while junior Sarah Oberweis (24:18) and senior Alyssa Williams (25:20) finished ninth and 12th, respectively.

Finishing in the top for the boys during the Boulder City weekday race were sophomore Ethan Porter, who came in seventh place with a time of 18:35.

Finishing with a team score of 79 points for fourth-place, Pahrump Valley won the boys race with a score of 42.

Competing in the Lake Mead Invitational on Saturday, Oct. 6, the Lady Eagles finished third with a team score of 67, behind Moapa Valley (47) and Valley (64).

Ending their week with the O’Dea Frosh-Soph Invitational on Tuesday, Oct. 9, Henderson (18:24.7) finished seventh out of 69 runners in the freshman race, while Dickerman (19:36.8) finished 28th out of 79 runners in the sophomore race.

Heading toward the postseason, the Eagles will compete in the Southern Division finals on Saturday, Oct 13, at Basic High School.

Dropping their second consecutive contest after a four-game win streak, the Eagles (4-3) kept it respectable in the first half, trailing 9-7, before allowing three second-half touchdowns.

Unable to contain Moapa Valley quarterback Luke Bennett, the Pirates senior threw for two touchdowns in the third quarter before rushing for a score in the fourth quarter.

The Eagles managed to give up only 279 yards of total offense but weren’t able to contain key big plays.

Passing for 134 yards, Reynolds connected on 14-of-28 passing, while Lopez caught two passes for 63 yards.

Senior running back Thorsten Balmer rushed for 88 yards on 22 carries.

The Eagles travel to Rancho on Friday.

Boulder City High School boys soccer team split a pair of games with its rivals this week, defeating Moapa Valley on Oct. 4, while falling to Virgin Valley on Monday, Oct. 8.

Hosting the Pirates, the Eagles (5-6) displayed an offensive showcase against Moapa Valley in a 6-0 victory.

Junior Mason Hood and sophomore Julian Balmer scored a pair of goals each, leading the way for the Eagles, while juniors Benson Deml and Adam Romanov each scored a goal.

Balmer also generated an assist against the Pirates, while senior Chandler Larson, junior Dayton Smith and sophomore Adam Leavitt each dished out an assist.

The Eagles weren’t able to duplicate the same effort on the road against Virgin Valley, falling 1-0 to the Bulldogs.

In the thick of the postseason race, the Eagles will host Chaparral on Tuesday, Oct. 16.

Results from the team’s Wednesday, Oct. 10, contest against Sky Pointe will appear in next week’s issue.

The Lady Eagles will travel to Chaparral on Tuesday.

Results from the team’s Wednesday contest against Sky Pointe will appear in next week’s issue.