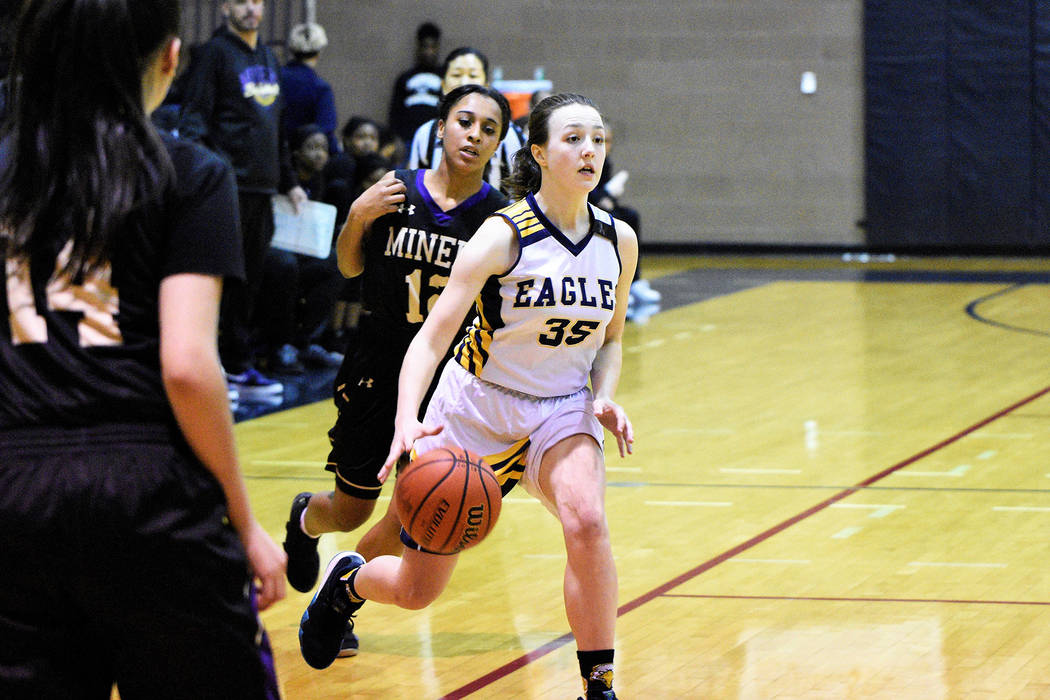 Remaining atop the 3A Sunrise League, Boulder City High School’s girls basketball team cruised to a pair of victories, defeating a Sunrise Mountain on Tuesday, Feb. 12, and Chaparral on Feb. 6.

Playing smart defensive basketball against Sunrise Mountain, the Lady Eagles were able to contain Miners guard Markaila McCurdy, who averages 16 points per game, to 7 points in their 45-32 victory.

“Defensively we played great,” head coach Kirk Estes said. “McCurdy is probably is one of the best players in the league and between a couple of defenders were able to hold her to low points. At the end of the night she was so frustrated and took herself out of the game and it was because of our team defense. These girls were playing against her.”

Junior forward Ellie Howard scored a game-high 18 points with 10 rebounds, including 10 points in a 18-3 second-quarter run.

Finding her groove this past week, Howard led all scorers against Chaparral, as well, with 16 points, in the Lady Eagles’ 54-35 victory.

Looking to wrap up the No. 1 seed in the Sunrise League, the Lady Eagles travel to Moapa Valley on Friday for their regular season finale.

“Winning our last game was very important because ending on a good note is always a good way to start the playoffs,” senior Ryann Reese said. “It shows us that we can and are able to keep winning as long as we work together as a team and keep focus.”

Using a balanced attack against the Cowboys, junior quarterback Makaela Perkins completed 14 of 20 passes for 105 yards and two touchdowns, connecting with Reese and junior Makena Arboreen. Reese caught three passes for 23 yards, while Arboreen hauled in three catches for 32 yards.

Doing a majority of her work on the ground, Arboreen picked up 111 rushing yards and a score on 20 carries, while making two interceptions on defense.

Clinching the third seed in the 3A Southern Region playoffs, the Lady Eagles will host No. 6 seed Valley today at home.

“Playing at home is always exciting because it’s your field,” Reese said. “Hosting a playoff game is even more exciting because you get the advantage of playing on your own field with your side cheering you on.”

Boulder City High School’s boys bowling team concluded its season as the 3A state champion runner-up Feb. 7, falling to The Meadows 2,063-1,955 at The Orleans.

Leading after the first match 660-618, the Eagles fell behind the Mustangs in the final two games to end their state championship hopes.

Sophomore Jamison Kaboli led the team with a score of 609, bowling the best score of the day in match two against the Mustangs with 247.