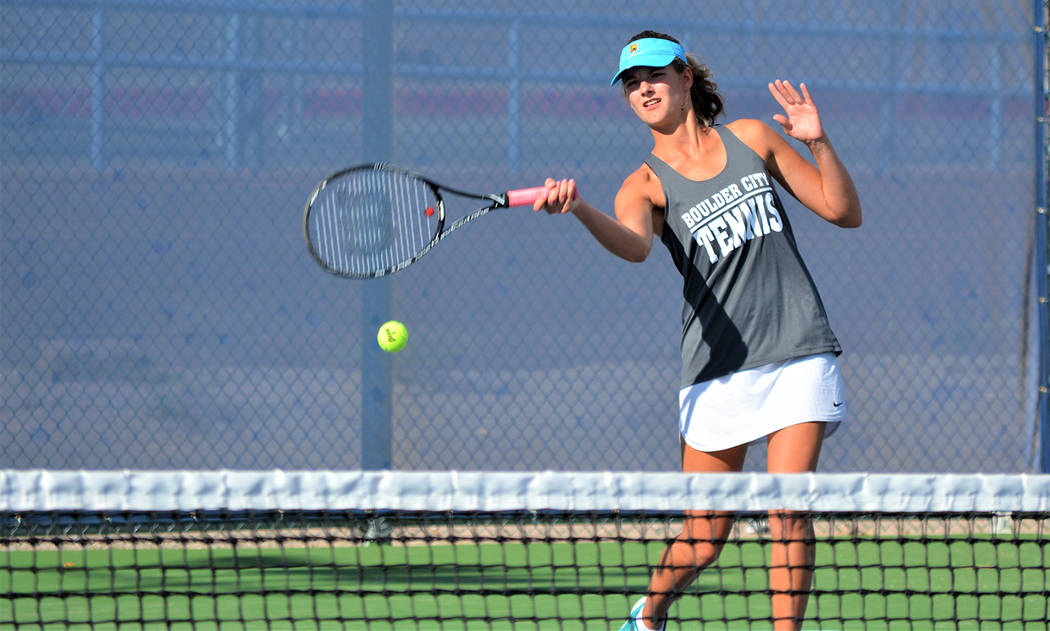 Boulder City High School girls golf team is riding into the postseason with a lot of confidence after dominating league play throughout the regular season.

Despite failing to qualify as a team in their last league matchup at Las Vegas National due to participation numbers, the Lady Eagles still claimed the top three spots.

“We had some girls that needed to make up school work, so obviously we let them stay behind,” head coach Andy Schaper said. “Our girls that did make it out there did really well as they have all season. It’s been a really good year, seeing everyone improve. We’re excited to see how the postseason plays out.”

Senior Ryann Reese placed first with a score of 88 on the par-72 course. Junior Sydney Krumm and sophomore Paige Rudd finished second and third, respectively, with scores of 94 and 114.

“Everyone has improved since the start of the season,” Schaper said. “Ryann has really taken a big leap with her play and it’s amazing to see how far she’s come along in the past four years. She’s a grinder, always trying to get better. It’s showed in her play this season.”

Finishing first again on Sept. 27 at CasaBlanca Golf Club, Reese led the Lady Eagles to a league victory with a team score of 365. Chaparral (542) and Sunrise Mountain (562) finished second and third.

Placing first in each league match this season, Reese shot a 81 on the par-72 course.

Sophomore Riley Shuman (92), Krumm (92) and junior Makaela Perkins (100) finished second, third and fourth to round out the Lady Eagles’ core.

Prepping for the 3A Southern Regional tournament, the Lady Eagles will travel to Mesquite, Nevada, for a two-day event starting Tuesday, Oct. 9, at The Palms. Round two of regionals will conclude Wednesday, Oct. 10, at CasaBlanca Golf Club.

Junior Sophia Morris won two doubles matches, one with junior Olivia Leavitt and the other with senior Heather Patterson.

Rolling into postseason play, Boulder City will host Valley today, Oct. 4, in the first round of the 3A Southern Regional tournament.

Previously riding a four-game winning streak, the loss was out of conference and will not affect the Eagles’ postseason standings.

“It’s really tough to play a nonleague game in the middle of the season,”head coach Chris Morelli said. “I don’t think the boys were fully focused on that game and it showed in our play. We were very sloppy on offense and couldn’t take care of the ball. If we played with the type of effort we have in the past, I believe we could of won that game.”

Trailing 21-0 at the half, the Eagles put forth a better effort on both sides of the ball.

Shutting the Diamondbacks out offensively in the second half, senior running back Thorsten Balmer made the game respectable with a pair of rushing touchdowns.

Finding mixed success with the passing attack, junior Parker Reynolds finished the night 9-of-22 for 140 yards, connecting with sophomore Deavin Lopez on three passes for 70 yards.

The Eagles will host rival Moapa Valley on Friday, Oct. 5, in a battle for first place in the 3A Sunrise standings.

Boulder City High junior Audrey Selinger led the way in Friday’s, Sept. 28, Falcon Invitational at Foothill High School with a 19th-place finish out of 84 runners in the junior-senior race with a time of 22:42.9.

Senior Justice Tilman finished 59th out of 174 runners with a time of 19:55.9 in the junior-senior race.

The Eagles will compete in the Lake Mead Invitational on Saturday.

Results from the Eagles’ home Wednesday, Oct. 10, weekday race will appear in next week’s issue.

Boulder City High School boys soccer team dropped a pair of league contests this week to Chaparral on Sept. 26 and Sunrise Mountain on Oct. 2. Shutout in both games, the Eagles (4-5) fell to the Cowboys 8-0 and the Miners 10-0.

“The last couple games we’ve played have been against top tier teams and I don’t really think this reflects how the team has been playing,” sophomore Julian Balmer said. “We’re constantly improving and I know from the last couple years playing and the years before that watching my brother play that the team is playing at the highest level in many years. The team has a lot of talent and I’m confident that these tough games will not hinder our future performances.”

“The girls played in spectacular soccer fashion, dominating with their teamwork and skill of the game,” head coach Arnold Oeland said. “They have worked hard to be a formidable team in their league.”

Putting on an offensive showcase against the Cowboys, junior Makenna Arboreen led the way for the Lady Eagles (2-5) with a pair of goals, while juniors Keely Alexander, Madison Manns, Trinity Oeland and Erin Taggard each scored a goal.

Mustering up a great effort Tuesday, Oct. 2, against Sunrise Mountain, the Lady Eagles continued their strong play but were unable to come away with a victory, falling 3-2.

“The girls are evolving at an exponential rate,” Arnold Oeland said. “The girls are very eager and excited to reclaim their rematches against the previous close games with their newfound love of the game and passion for soccer. They have rounded the corner on their development and are displaying ball dominance and we are all ready and prepared for the next challenging games.”