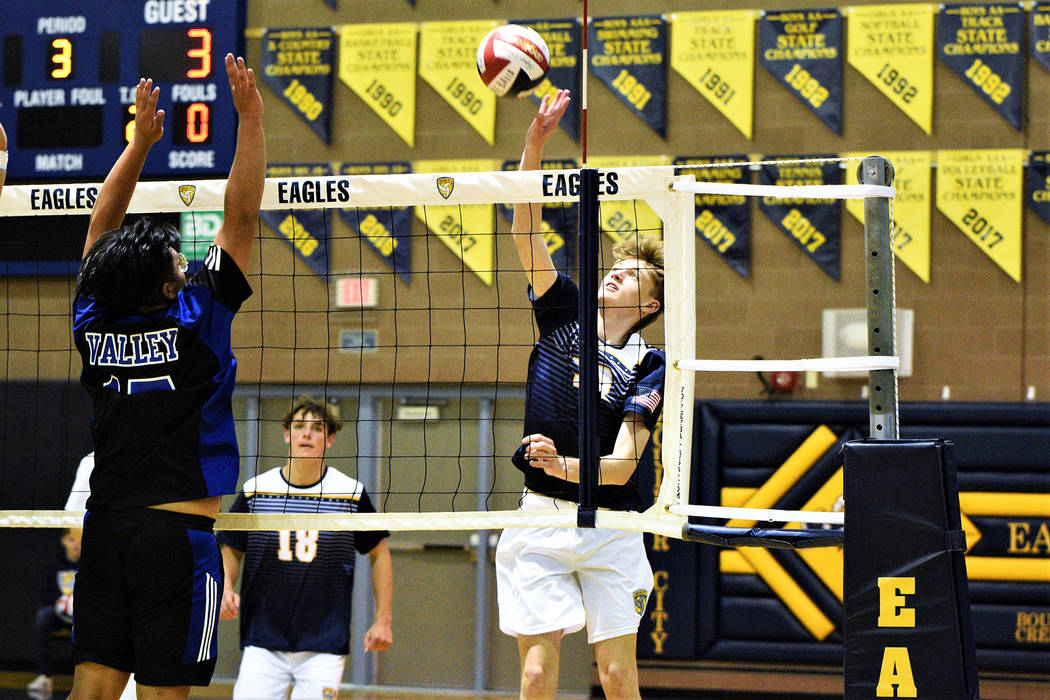 Advancing to 21-9 on the season, the Eagles defeated league opponents Chaparral on April 25, Valley on Monday, April 29, and 4A Legacy on Friday, April 26.

“The top four teams in our league are really tough, so it’s important that we keep this winning spirit alive,” junior Preston Jorgensen said. “We’re trying to ride this wave of confidence and hopefully carry it out for the rest of the season.”

Absolutely dominating Valley, the Eagles cruised to a 25-10, 25-13, 25-15 victory, putting away any doubt that the team is fading after a slow start after spring break.

“I think this was a really good game for us,” Jorgensen said. “We came out slow after spring break, but this win proves that were going to come back to midseason form and that we’re ready for the playoffs.”

Adding three kills each in the winning effort were juniors Boen Huxford and Dylan Leasure, along with sophomore Cameron Lemon.

“It’s not so much keeping the winning streak alive that I’m worried about,” head coach Rachelle Huxford said. “We’re focused on keeping the momentum that we’ve built up going and having the boys continually doing well so that when we get into the postseason and start playing the hard teams again, they’re still warm and loose and confident.”

The Eagles wrap up the regular season tonight, May 2, with senior night against 4A Eldorado. Results from the match against the Sun Devils and their Wednesday, May 1, contest against Western will appear in next week’s issue.

Getting ready for regionals, the Eagles will take the pool at UNLV on Monday, May 6.

Matched up against Nevada 4A programs and five California programs, BCHS was the only 3A school represented, finishing with an overall team score of 707.

Sophomore Blake Schaper finished tied for 14th with an overall score of 148. Playing on the par-71 course, Schaper shot a 73 on day one and a 75 on day two.

Sophomore Kyle Carducci finished 65th out of 72 competitors with a score of 179.

The Eagles conclude their regular season Wednesday, May 1,; results from the 3A Sunrise League match at Coyote Springs will appear in next week’s issue.

Boulder City was one of three 3A and 13 4A schools at the meet at Green Valley High School.

Leading the way for the boys, sophomore Sean White finished seventh out of 38 competitors in the 1600-meter run and 12th out of 27 in the 800-meter run.

Freshman Mary Henderson finished ninth out of 21 in the 1600-meter run.

Getting in one last warm-up this Saturday, May 4, before their regional meet, the Eagles will participate on the Grant Bushman Invitational at Moapa Valley.