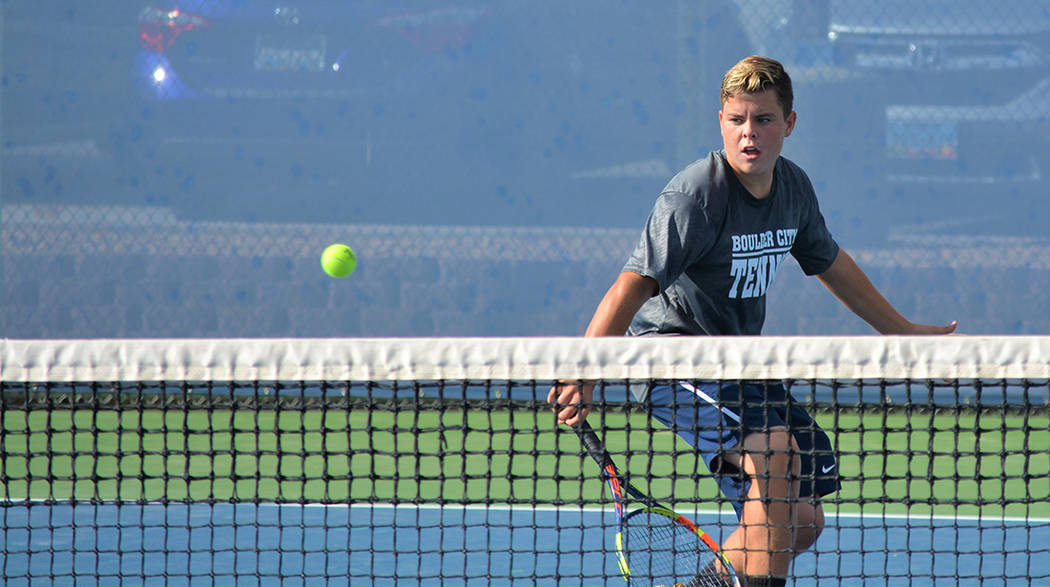 “Everyone played so well in the regional finals; they played their hearts out,” boys head coach Rachelle Huxford said. “Having so many qualify individually for state is a proud moment for us as coaches and for our team. We couldn’t be happier with the results. Seeding is so important in the state tournament. Our players are peaking at the right time and they couldn’t be more ready for state.”

Battling against each other for the boys doubles title, Jorgensen and Huxford defeated teammates senior Karson Bailey and junior Ty Pendleton 6-3, 6-1.

Jorgensen and Huxford will enter as the South’s No. 1 seed while first-year teammates Bailey and Pendleton are the No. 2 seed.

“I’m extremely excited to be in individual state this year,” Bailey said. “The last two years I have come so close to making it and I believe Ty and I have a great chance to go far.”

Senior Natalie Bowman and junior Katelyn Fox locked up the No. 3 seed for the state tourney after defeating The Meadows’ Shayna Indyg and Claire Strimling in the third-place match 2-6, 6-3, 6-2, while junior Breton Erlanger will go in as the No. 4 seed after falling to Moapa Valley’s Chase Hadley 6-4, 5-5 in the third-place match.

In doubles play Jorgensen and Huxford will play Jeremiah Dahl and Clyde Rypins from South Tahoe, while Bailey and Pendleton will face Quinn Proctor and Pete Sullivan from South Tahoe.

For the Lady Eagles, Olivia Mikkelson will play Millie Jenkins from Incline Highlanders while the doubles duo of Bowman and Fox will face Truckee’s Lilah Abarno and Kira Collins.

Finishing with a team score of 34, the Lady Eagles trailed only rival Moapa Valley (24) behind three runners in the top five. Placing third, fourth and fifth, junior Audrey Selinger (21:20.9), sophomore Sophie Dickerman (21:29.8) and freshman Mary Henderson (21:34.8) led the way for the Lady Eagles.

The boys, finished with an overall score of 43, trailing only Moapa Valley (18).

Off for the week, the Eagles are preparing for the 3A Southern Region championships Oct. 26 at Veterans’ Memorial Park.

Wrapping up league play, the Lady Eagles will travel to Virgin Valley tonight, Oct. 18, followed by a road game at Chaparral on Monday, Oct. 22, and a home game Wednesday, Oct. 24, against Sky Pointe.

Boulder City High School boys soccer team was unable to get in the win column this week, dropping contests to league opponents Sky Pointe on Oct. 10 and Chaparral on Tuesday, Oct. 16.

Falling to Sky Pointe 2-0, the Eagles (5-8) showed a better effort against Chaparral but were defeated 6-1.

Scoring the lone goal for the Eagles was junior Austin Morris.

Still in the thick of the 3A Sunrise League playoff race, the Eagles will host Sunrise Mountain on Monday, Oct. 22, followed by a road contest against Moapa Valley on Wednesday, Oct. 24.

The Lady Eagles (4-7) finished with a 5-1 victory against Sky Pointe courtesy of three goals from sophomore Sophia Legat and two goals from junior Makenna Arboreen.

Junior Madison Manns dished out a pair of assists, while Arboreen and Legat each generated one assist.

Fighting for a playoff spot in the 3A Sunrise League, the Lady Eagles will travel to Sunrise Mountain on Monday, Oct. 22, followed by a home contest against rival Moapa Valley on Wednesday, Oct. 24.