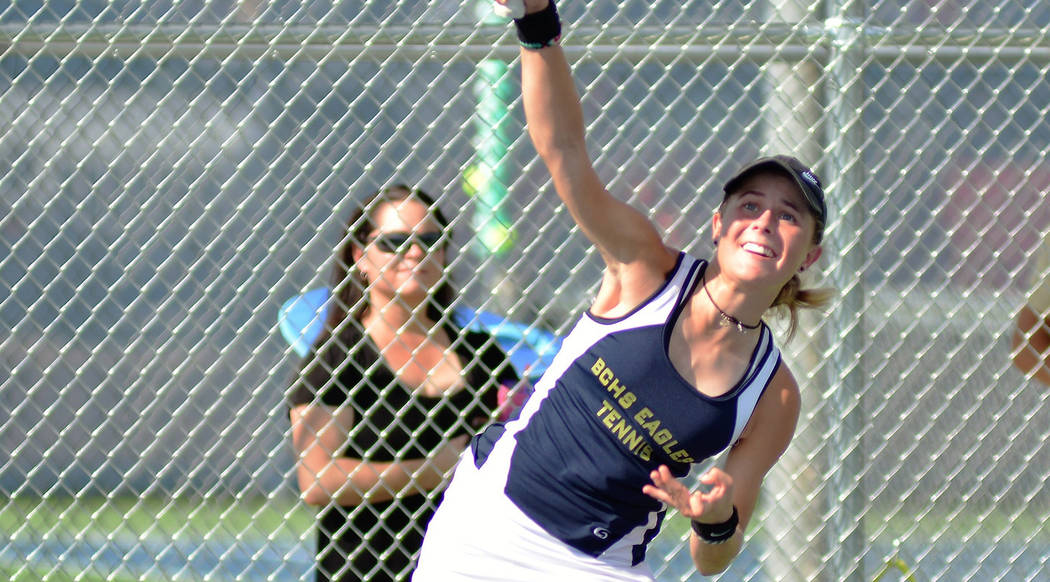 Boulder City High School junior Olivia Mikkelson, seen winning her matches against The Meadows on Aug. 23, was named the 3A Southern Region player of the year after winning her second consecutive state title.

Establishing herself once again as the classification’s top individual talent, Mikkelson battled through the pressures of trying to repeat with a target on her back.

“This year I knew was going to be tougher than last year, because my competitor showed much improvement from when we last played,” she said of her rematch of last year’s final against The Meadows’ Lindsey Hofflander. “During the match I was down match point and managed to fight back with everything I had left, winning 7-5 in the third. I can tell you that I have never been more relieved. I felt an immense amount of pressure to defend my state title. I had my team and family supporting me, as well as my amazing coaches. By never giving up and fighting until the bitter end, this resulted in winning my second state title.”

Mikkelson dropped the final’s first set 4-6, before winning the following two sets 6-1 and 7-5.

In addition to repeating as the state title winner, Mikkelson won her second player of the year award. She also made the All-Southern Region first-team.

“I wanted to win this for my coaches, my town, my family and myself,” she said. “I started the year off in a hospital and struggled getting my health back in order. Winning another state title and seeing success in my game didn’t seem realistic due to my recovery time. By winning this title for the second consecutive year, I’ve never felt better.”

Joining Mikkelson on the All-Southern Region first team is the Lady Eagles doubles tandem of senior Natalie Bowman and junior Katelyn Fox, who defeated Shayna Indyg and Claire Strimling from The Meadows in the 3A state tournament third-place match 6-0, 6-4.

Huxford capped off a back-to-back state championship run leading the Eagles to an undefeated 40-0 record during her first two seasons with the program.

“I’m honored to win this award,” she said. “I couldn’t have done this without my kids, and that’s why I do it, for the love of the game. I do it without the accolades because they’re awesome, and I’m just lucky to be doing what I love.”

Fielding an all-star lineup, the tandem of juniors Boen Huxford and Preston Jorgensen and the tandem of senior Karson Bailey and junior Ty Pendleton were named All-Southern Region first-team selections, along with junior singles competitors Connor Mikkelson and Bretton Erlanger.

“Winning another state title with my amazing teammates was such a cool experience,” Connor Mikkelson said. “I wouldn’t trade it for the world. Our coaches are incredible and gave us the confidence and belief we needed in order to win. I am so grateful to be a part of this team and be able to partake in this incredible experience.”

Winning more than team titles, Jorgensen and Boen Huxford defeated Bailey and Pendleton in an all-Eagles doubles final 6-2, 6-0 to win their first individual state title as a pair.

Finishing as the 3A state runner-up, Mikkelson made it to the finals against Western’s Rua Elmore before falling 6-3, 6-4.

Named to the All-Southern Region second team for the boys was the doubles tandem of senior Leaf Kaboli and junior Philipp Zengl.