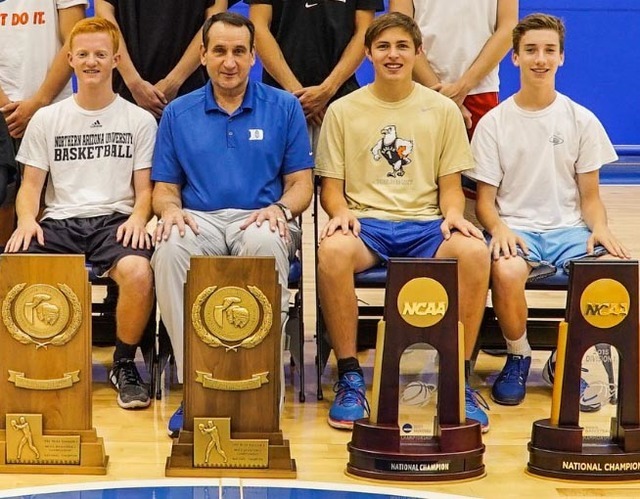 A great many life lessons can be learned while playing basketball.

This philosophy is one of the reasons why Boulder City Highs head basketball coach John Balistere has made it a staple of his summer program to take as many Eagles as possible with him to the Duke Basketball Camp in North Carolina, where he has worked for the past 15 years.

The lessons you learn from the Duke camp, not only in basketball but in life, are second to none, Balistere said. Its honestly such a positive experience for these boys to travel to North Carolina, see a whole new playing field of competition, get instructions from some of the best coaches Ive had the privilege to meet, and form relationships with players they wouldnt have got the chance to meet beforehand.

Taking a break from their summer vacations, juniors Carson Balistere, Teddy Lobkowicz and Tanner Montgomery and freshman Gavin Balistere joined their coach in Durham, North Carolina, from June 11-15 in hopes of soaking up as much knowledge as possible from one of college basketballs most well-known and winningest coaches, Mike Krzyzewski. Returning having learned valuable lessons on and off the court, the group had nothing but positive reviews about their experience and are already looking forward to next years trip.

I honestly enjoyed my experience very much, Lobkowicz said. Not only do I feel that the camp taught me how to become a better basketball player, but just as a person in general. (Its a) very hard camp, very disciplined, very demanding. If you are serious about basketball, this is where you need to be.

Coached not only by the 2015 national champion Duke staff, but a handful of lower tier collegiate and high school coaches, athletes attending the Blue Devils camp get a firsthand look at how to become a better player. What I feel sets the Duke camp apart from so many others is the attention to detail that is put into it, John Balistere said. You have several different coaches at each station, making sure theyre getting the most from their group  making sure that fundamentals are being taught. Not only does this help in a basketball perspective, but it also teaches these kids how to do things the right way  how to pay attention to detail and work on getting better.

At the camp, players are split into age divisions, with Carson Balistere, Lobkowicz and Montgomery playing with the junior and senior classes, while Gavin Balistere played with his age bracket consisting of mostly freshman and sophomores.

You get to see better competition than what youre used to here in our league, said Montgomery, who made a return trip with John Balistere this season. Were facing off against some of the top kids from their individual states. The Duke camp allows us to get better and help us focus on what we need to work on moving forward. Taking in the camp experience for the ninth time, Carson Balistere won the camps True Blue award, which is given to the player who takes the most charges throughout the four-day event. A reflection of his personality, the award symbolizes his drive to compete, no matter who his competition is. I was very humbled to receive the award, Carson said. Obviously throughout the camp, youre not focusing on winning it; youre just playing basketball. There were a lot of great players at the camp who deserved this as well. Im truly honored. Returning for the sixth time, Gavin Balistere said he feels that he soaked up more from this years experience now that hes heading into his first year of high school.

Ive been to the camp in years past, but this year was definitely more intense, Gavin said. Between running drills and facing off against good players, I feel like its helped me become a better player. Its helped me realize I have potential and to take basketball more seriously.

Echoing his sons sentiment, John Balistere said he also feels he gets better in his profession following each camp session.

Every year Im fortunate enough to be around a handful of coaches who are all the best at what they do, John Balistere said. Each year I go so my boys can get the experience out of it, but I benefit from it as well. Im looking forward to next years camp already.