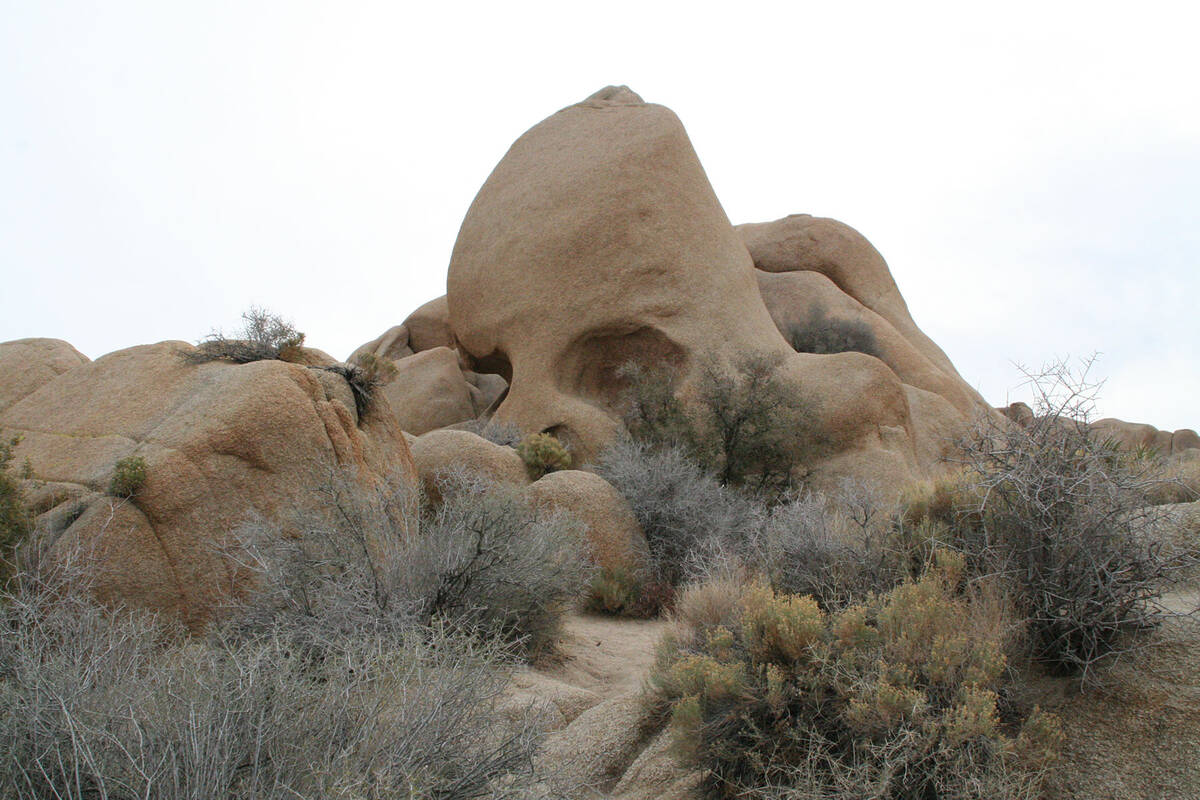 (Deborah Wall) What started as small depressions made by water, over time have eroded the granite into what appears as two hollowed eye pockets, hence the name Skull Rock. It is featured inside California’s Joshua Tree National Park. 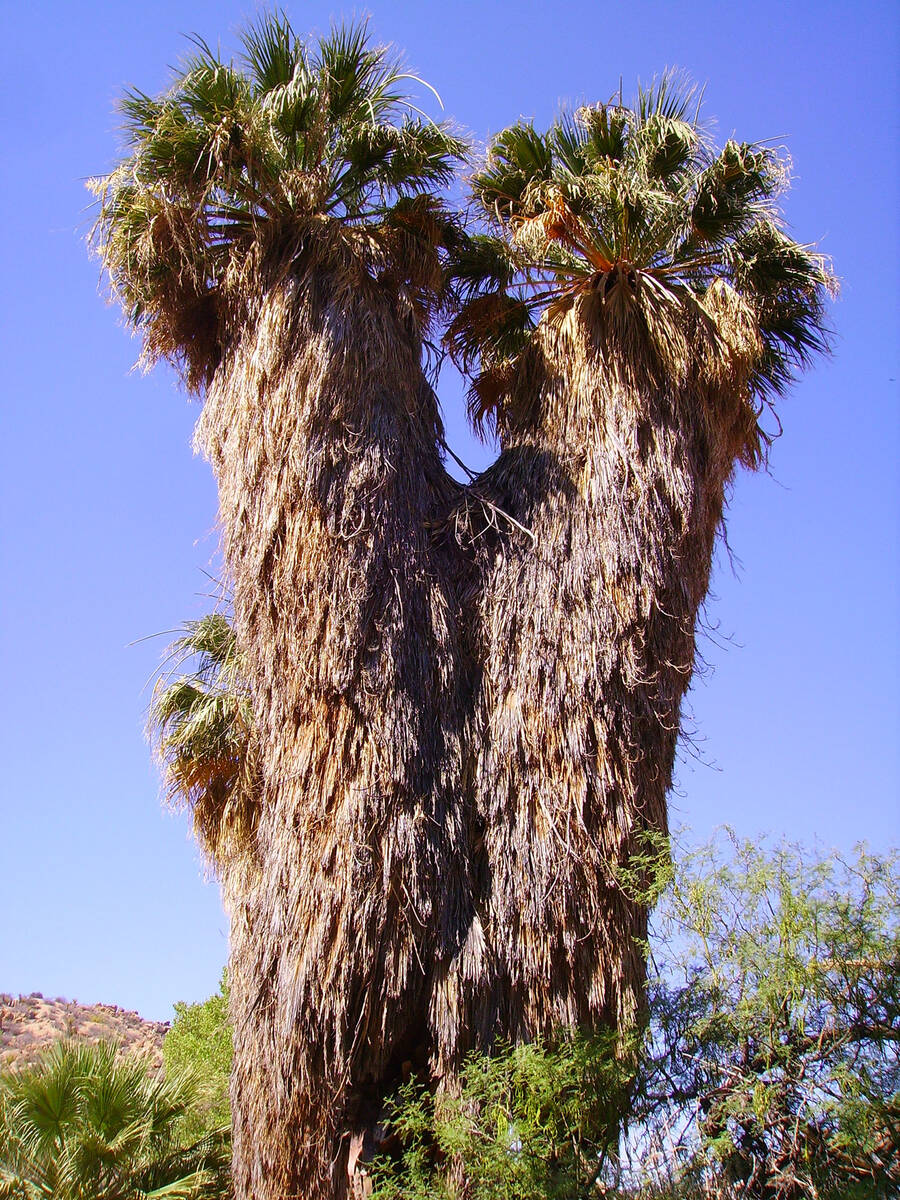 (Deborah Wall) These palms at Joshua Tree National Park in California serve as a roost for the Western yellow bat, and hooded orioles nest under the palm leaves. 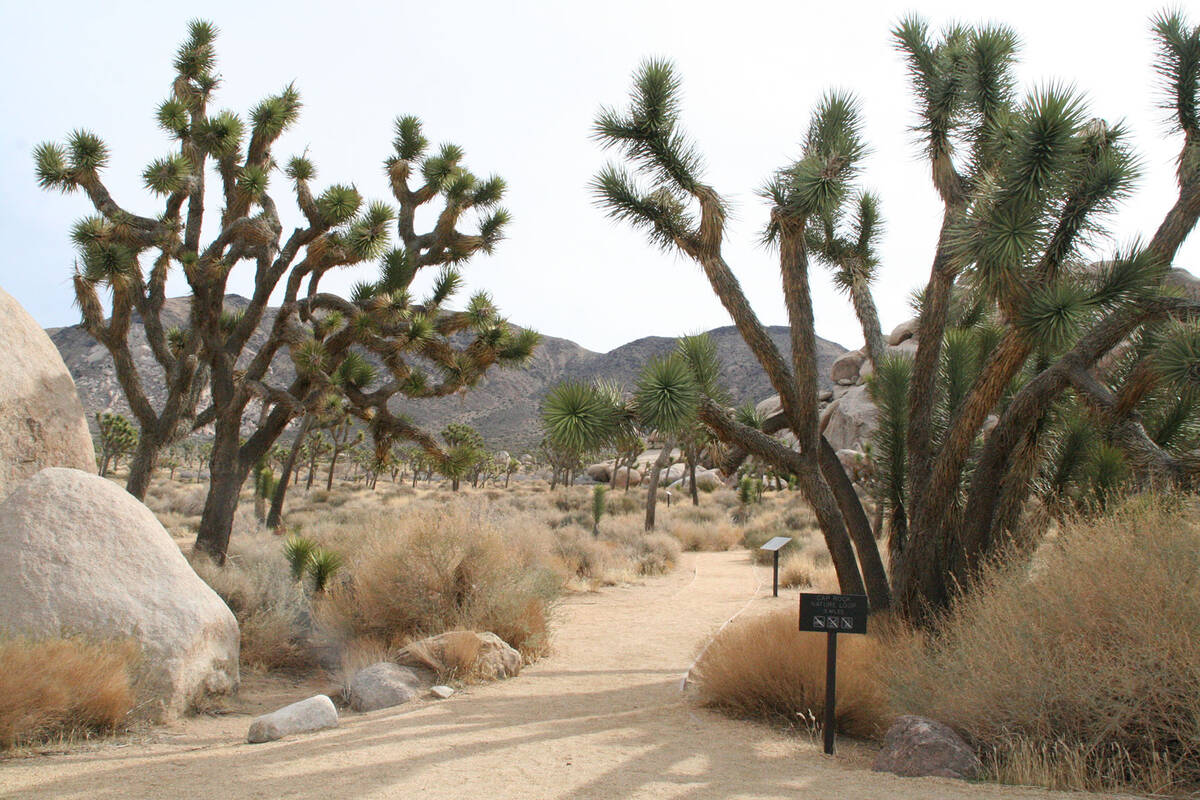 (Deborah Wall) The Cap Rock Nature Trail in Joshua Tree National Park in California is an easy 0.4 mile loop that travels through a Joshua tree woodland with monzogranite rock formations. 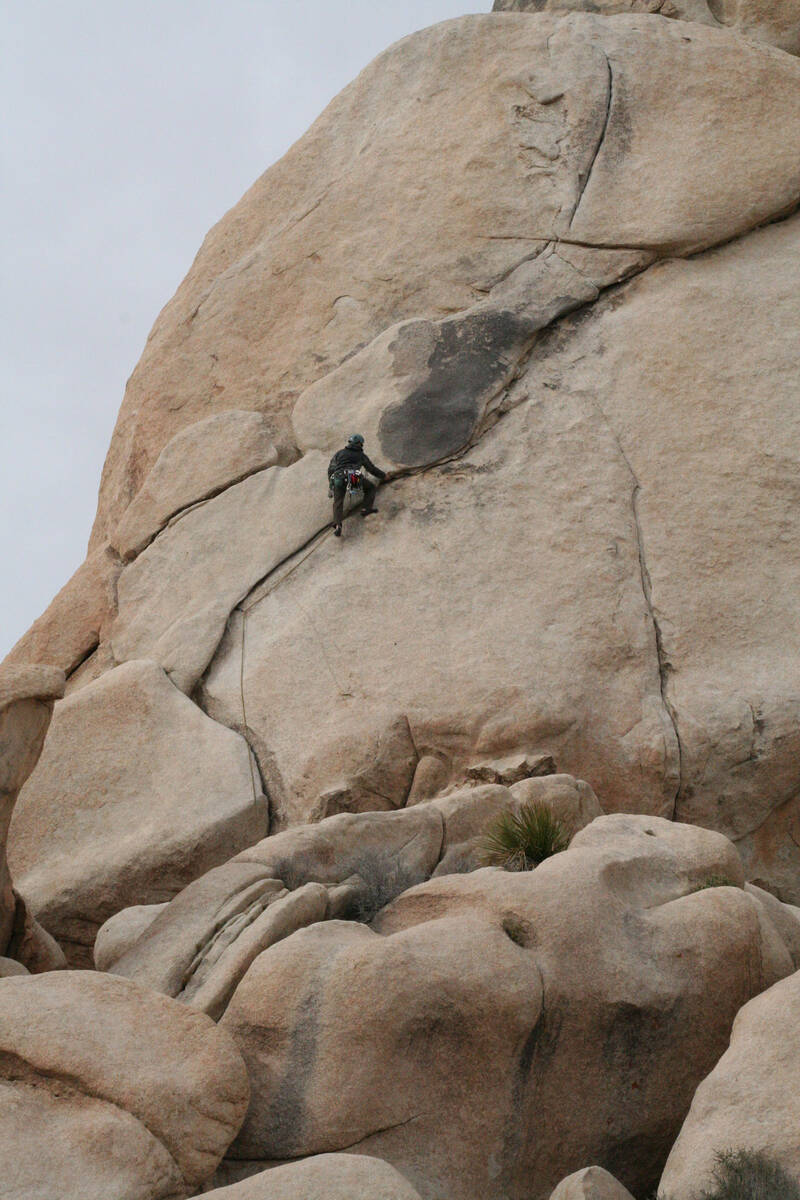 (Deborah Wall) Joshua Tree National Park in Southern California is a world-class climbing destination. With more than 8,000 climbing routes and 2,000 bouldering problems, it offers something for all ability levels.

Most easily entered through Twentynine Palms, California, Joshua Tree National Park sprawls south over about 800,000 acres. It has become a wildland mecca, attracting 2.8 million people a year, mostly from October to May. There are 8,000 rock climbing routes, 2,000 bouldering problems, 191 miles of hiking trails and five palm oases to visit. Camping and cycling the park’s back roads are popular.

The park has elevations ranging from 536 feet to 5,814 feet and hosts three of California’s ecosystems. The best known is in the northwestern half of the park, dominated by Joshua trees. But the park’s eastern portion lies in the Colorado Desert (a sort of subdivision of the larger Sonoran Desert), where vegetation consists mainly of creosote, palo verde, ocotillo and cholla cactus. A third ecosystem is in the westernmost part of the park above 4,000 feet where the Little San Bernardino Mountains are home to California juniper and pinyon pine.

The park is a stopping point along the Pacific flyway followed by migratory birds. More than 250 varieties have been recorded here. At least 78 species nest in the park, including horned lark, Western kingbird, American kestrel, great horned owl, ladder-backed woodpecker and hooded orioles.

Joshua Tree is probably the best place to see the impressive California fan palm, Washingtonia filifera, the only palm native to Western North America. Such trees average a 150-year lifespan and can grow to 75 feet tall. They thrive in areas of the park where there are copious amounts of underground water which is forced to the surface along earthquake fault lines.

There are five such palm oases in the park and it’s well worth visiting a couple. The closest to reach from the Las Vegas area is the Oasis of Mara. Its trailhead is located at the Oasis Visitor Center in Twentynine Palms, and takes you along a one-half mile loop trail, which is paved and rather level. If you are fortunate, you might even see a couple of hundred migrating turkey vultures here during their spring migration.

The next closest stand of palms, and one in a more natural setting, is the 49 Palm Oasis. The trailhead is located about 6 miles from the Oasis Visitor Center and from there you head out on foot for a moderate 3-mile round-trip hike with a 300-foot elevation gain.

The other three oases are Cottonwood Spring, Lost Palms and Munsen Canyon, all with one shared trailhead. It is located in the southern area of the park, about an hour’s drive from the town of Twentynine Palms. From the trailhead, Cottonwood Spring oasis is just a five-minute walk and Lost Palm about 3.5 miles farther with a 500-foot elevation gain. I would not recommend hiking to Munson as it is an extremely long and difficult outing.

The namesakes of the park, Joshua trees, Yucca brevifolia, are members of the agave family. This is a new classification; formerly they were thought to be large members of the lily family. DNA studies were responsible for the change after it divided the extensive family into 40 distinct ones. Largest of the yuccas, Joshua trees at maturity commonly are 15 to 40 feet tall although you will for sure see a few much taller.

It has been said that Mormon pioneers named the Joshua tree after the Old Testament figure who led the children of Israel into Canaan. Many thought the angular limbs of the tree, with daggerlike leaves only at the ends, suggested the warrior-prophet urging them onward toward another Promised Land. These quintessential trees of the Mojave Desert have a symbiotic relationship with the yucca moth, tegeticula yuccasella, for pollination.

The town of Twentynine Palms has an elevation at about 1,988 feet, so weather is pretty much the same as you’ll find in Southern Nevada this time of year. There are only a couple of places in the park where potable water is available, so be sure to bring your own — more than you expect to need. If you will be hiking, bring a minimum of two gallons per person per day and of course salty food, sunscreen, hat and sunglasses. The town of Twentynine Palms has complete services such as gas, markets and lodging.

Prior to your visit download maps and read information on camping, activities and services in the area from www.nps.gov/jotr, or contact Joshua Tree National Park at 760-367-5500.