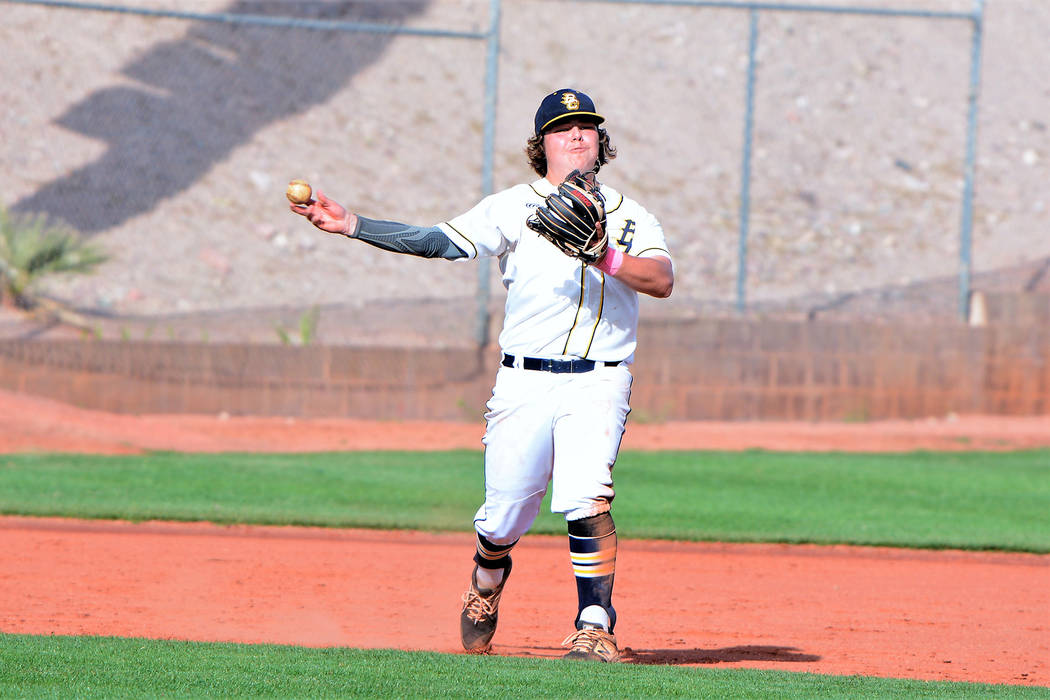 (Robert Vendettoli/Boulder City Review) Sophomore Blaze Trumble, who scooped a ground ball and rifled it to first base for an out against Bonanza on April 8, now leads the state in doubles after hitting his 15th against Virgin Valley on April 10, 2019.

“I thought we played really well,” head coach Ed McCann said. “We played some really good defense. On offense we were finally able to come alive later in the game and hurt them with our base running. We started scoring early and that’s what we’ll need to do here on out if we want to win ball games.”

Outclassing the Bulldogs, the Eagles accumulated 11 hits, sparked by four runs in the fifth inning and three runs in the sixth inning.

Sophomore Joey Giunta drove in four runs, finishing 2 for 3 at the plate with a pair of home for the Eagles. Sophomore Troy Connell batted 1 for 3 with three runs batted in.

Sophomore Scott Bahde finished 2 for 3 with an RBI, belting a double against the Bulldogs.

“I couldn’t be happier about the way he’s playing right now,” McCann said. “Blaze is a grinder; he comes in, works real hard and does his job. Our two through seven hitters are all like that. It’s murderers row out there. Everyone has each other’s back in the lineup, everyone is protected.”

On the mound for the Eagles, Giunta was near perfect against the Bulldogs, throwing 3 1/3 innings where he allowed just one hit with three strikeouts to earn the victory.

Following their league triumph with much-needed experience at the expense of losses in nonleague play, the Eagles found themselves on the losing end against 4A opponents Shadow Ridge and Rancho in the Blazer Spring Bash.

“Obviously losing isn’t fun, but adversity is good for this young group,” McCann said. “We haven’t experienced too much adversity this season so it’s nice to see how they’ll respond to this. The first game we were right there with Shadow before letting them get away and I felt like we took what we learned from that game and applied it to the Rancho game. We’ll learn from our mistakes and get better as a team.”

Falling to the Rams 5-1 on Tuesday, April 16, Trumble and senior Travis Hungerford both batted 2 for 3, while senior Brendan Thorpe finished 1 for 4 with a triple.

Results from the Eagles’ Blazer Spring Bash outings against Sierra Vista and Centennial-Bakersfield (California) will appear in next week’s issue.