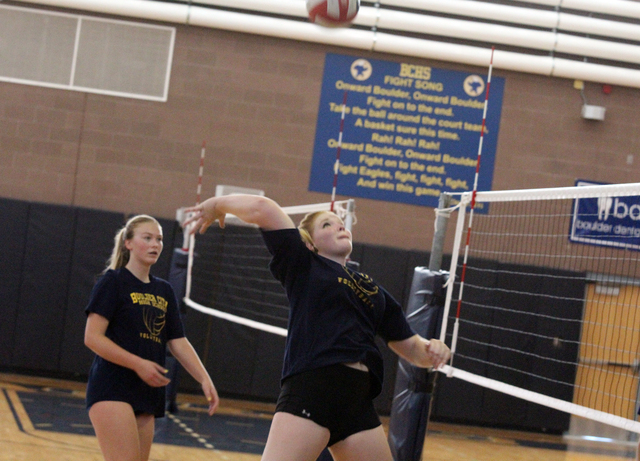 Entering her 19th season atop the Lady Eagles’ volleyball program at Boulder City High School, head coach Cherise Hinman has the same goal in mind each season: winning. Despite entering the season with a fairly inexperience roster, headlined by only two returning starters and four letter-winners, Hinman isn’t backing off on her winning attitude.

“We expect to be competitive in our conference every year and compete for state championships,” Hinman said. “This season will be no different. We’re bringing a winning attitude with us to start the season.”

Looking to lean on a pair of varsity veterans, the Lady Eagles will rely heavily on the one-two punch of senior setter Alea Lehr and junior opposite hitter Maggie Roe to continue the program’s consecutive postseason streak under Hinman, who has made it each year of her tenure.

“The two starters we have coming back are very talented,” she said. “The question will be if their shoulders are big enough to carry the heavy load this season will create, with many players on the team not having as much court time with upper level.”

Looking to carry the heavy burden offensively will be Roe, who is regarded as one of the premier high school volleyball players on the West Coast. She has been featured twice as one of the nation’s top underclassmen by prepvolleyball.com.

An all-around star for the Lady Eagles, Roe was named a Division I-A All-State selection last season, following a productive year in which she led the team with 337 kills, while tallying 259 digs, 92 aces and 41 blocks. With several key contributors gone from last season, expect big things from the newly appointed captain.

Lehr also will play a crucial role for the Lady Eagles, having established herself as one of the better setters in the conference. Looking to contribute more this season, Lehr should be able to better her junior stat sheet of 346 assists, 82 aces and 81 digs from last season.

“As one of our captains this season, I expected both of their roles to increase quite a bit,” Hinman said. “I’m depending on both Maggie and Alea as my two upperclassmen to be very vocal on the court and make those on-the-court decisions that need to be made as far as plays.”

This season Lady Eagles welcome seniors Kenadee Bailey and Lexi Bringle who will pair as the team’s top newcomers.

“Kenadee is very athletic and is a player I can put almost anywhere in the front court,” Hinman said. “Lexi will serve in a defensive specialist role for us. She knows how to hustle after the ball.”

Starting at libero this fall will be Bringle, joined by senior Cortney Blumenthal at middle blocker, junior Jerra Hinson at outside hitter and senior Tara Spinkelink as the team’s defensive specialist.

“What’s going to help us is these girls have all played together on our club team this past season,” Hinman said. “We’re looking to carry that momentum over into a new season.”

Adding depth for the Lady Eagles will be senior reserves Aimee Finn, Jules Worrall and Bailey, who will once again look to be atop their newly constructed league.

“Our new 3A League will still be tough for us,” Hinman said. “Virgin Valley will still be competitive with their big outside hitter and good defense. I expect Moapa to be our strongest competition, as well. They were a young team last year, losing only one player, and were very talented with some big hitters. We will have our work cut out for us when we play them.”

The Lady Eagles will start their season Friday in the Las Vegas Invitational, where they’ll play Granite Hills (California), Silverado and Lake Mead.