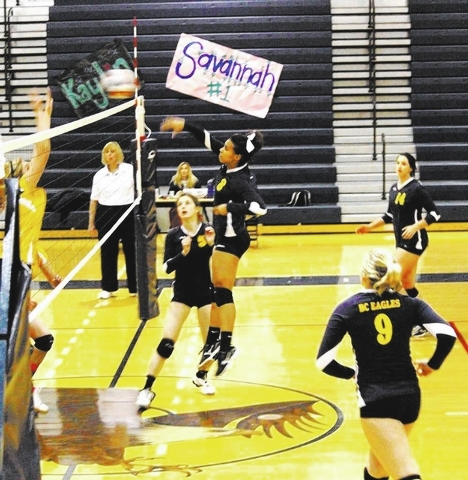 The Boulder City girls’ volleyball team defeated visiting Moapa Valley 25-20, 25-14, 25-22 on Monday to remain unbeaten and in first place in the Sunrise League.

“Our team is really doing well,” Barlow said. “Kinsey has really gained some strength in the middle and Alyssa (Ybarra) is playing real well on the back line. Kendall is so consistent in the middle. They are part of why the team is doing so well.”

“The entire team is coming together,” Miller said. “Players like Kinsey, Alyssa and Whitney are taking the lead and everyone is following them and playing so good. We are in first place in our league and gaining momentum heading into the playoffs.”

Faith Lutheran won the regional team title with a 332 score. The Lady Eagles did not qualify as a team.

Syler’s results in the state tournament occurred after deadline and will appear in the Oct. 31 issue.

The Eagles baseball team will hold its second annual Texas Hold ‘Em Poker Tournament at 6:30 p.m. Nov. 15 at the Hacienda. A $50 buy-in will get each player $2,000 in tournament chips.

“Last year, we had over 70 players and this year we are hoping to max out the tournament field of 100,” said Eagles varsity coach Bobby Reese, whose team reached the state final last May. “The Hacienda has graciously donated some of its poker dealers and is allowing us to use the banquet room.”

There will be reduced rates for drinks and free finger foods, hats and T-shirts. There are special prizes for any player who knocks out a baseball coach (Reese, Alex Moore, Tim O’Neill, Chris Morelli and Johnny Nelson) from the competition.

For more information, contact Reese at 702-218-5866 or at RWR941@interact.ccsd.net. Aaron Wrightsman is the tournament director.

The Eagles lost 5-0 to Sunrise Mountain on Oct. 17 to fall to 4-9-1 overall and 1-7-0 in the Sunrise League. They had a match Monday at home against Desert Pines. They also had a scheduled match Wednesday against Virgin Valley in Mesquite.

The Lady Eagles (4-8-0 overall, 3-6-0 in league) had a match Monday at Desert Pines and Wednesday against Virgin Valley.