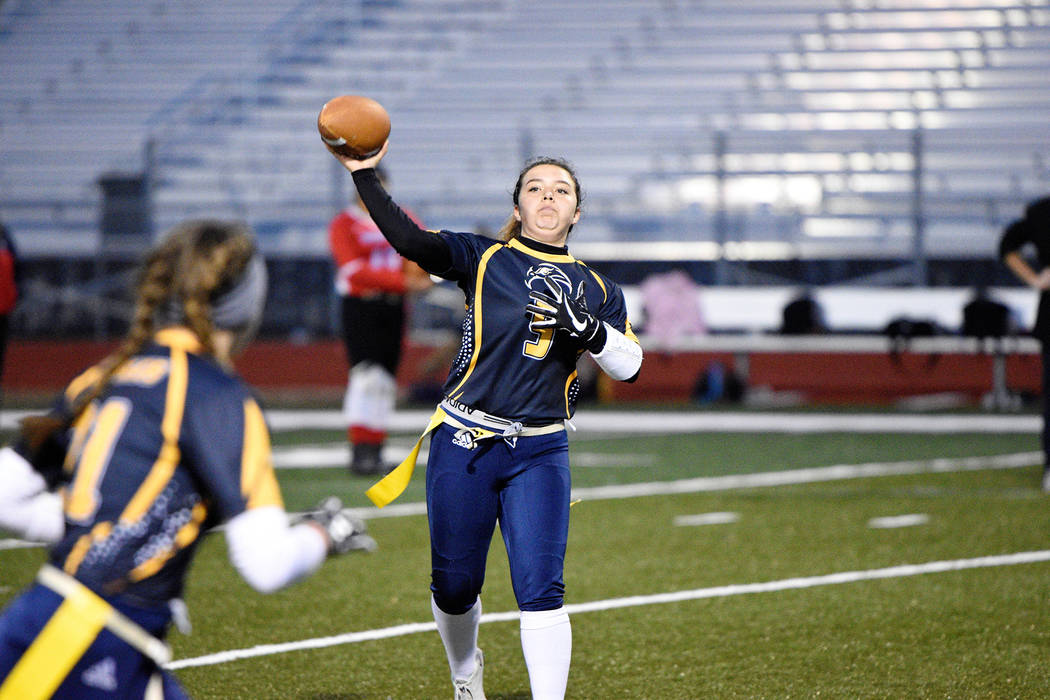 Keeping it too close for comfort, Boulder City High School’s flag football team won a pair of games this week, advancing to 8-3 on the season.

“The girls did a great job picking up the pace and fighting for these wins,” head coach Kevin Ruth said. “We are doing enough to win but need to improve during these second round of conference games if we want to accomplish our goals.”

The Lady Eagles trailed the Warriors 25-7 entering the fourth quarter before the stellar play of junior quarterback Makaela Perkins led the comeback victory.

“I’ve seen Makaela improve by the way she looks at everyone before she throws and how far she can throw now,” Reese said. “She has been gaining distance and it’s been a huge help. It’s so important for her to stay on her game because you can’t play football without a quarterback.”

An all-around playmaker, Reese generated 47 rushing yards on 10 carries, while making seven tackles on defense. Junior Jasmyn Curl rushed for 108 yards and a touchdown on 15 carries to help the winning effort.

Controlling their outing against Mojave from the beginning, Perkins continued to show consistency, completing 13 of 17 passes for 185 yards and a touchdown.

Holding off a late Mojave surge, Curl rushed for 107 yards and a touchdown on 14 carrier, continuing to shine in her new role as lead running back to give the offense balance.

“It’s incredibly important to have a balanced team,” Perkins said. “We have some great blockers but with certain defenses the run plays may not work as well as some pass plays might and vice versa. Us being able to do both right now has really become a key advantage to us getting so ahead in the game.”

Junior Clarissa Sitko led the defense, generating a combined 10 tackles against the Warriors and Rattlers.

Riding a three-game winning streak, the Lady Eagles know there’s still room for improvement. With the second half of league games coming around, Boulder City will travel to Sunrise Mountain on Friday, Jan. 25 before hosting rival Moapa Valley on Tuesday, Jan. 29.