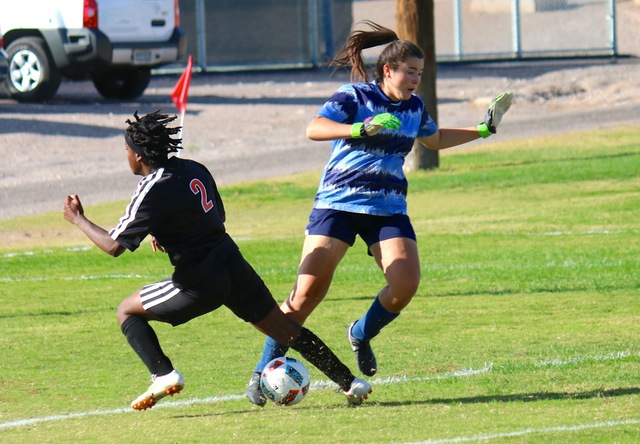 In a successful attempt to block the shot, Goalkeeper Erin Taggard charged the ball and the Chaparral player running the ball. Each player had a solid kick that sent both girls to the ground and the ball back in the playing field. The Lady Eagles came away with a 3-1 victory on Oct.26. Laura Hubel/Boulder City Review

The Boulder City High School girls soccer program (6-8 overall, 4-6 conference) has qualified for the postseason for the first time since 2012, despite splitting their final two contests.

The Lady Eagles knocked off Chaparral 3-1 on Oct. 26 to cap off senior night. The team later dropped a tough road game against Moapa Valley on Oct.27 by a score of 2-1.

Jumping out to an early 2-1 lead over the Cowboys, senior forward Jordyn Trobiani led the way with a pair of goals, while freshman midfielder Madisan Manns added a goal. Both senior defender Alexus Pope and freshman midfielder Trinity Oeland would both contribute with assists in a winning effort.

Scoring the Lady Eagles lone goal against the Pirates, Trobiani would bring her season total to a team-leading nine. Manns follows just behind with eight goals.

The Lady Eagles travel to Bettye Wilson Park on Wednesday to take on Western in the quarterfinals of the 3A Southern Region playoffs. A recap of the teams postseason performance is on Bouldercityreview.com.

Despite ending their season with a pair of losses, it was still a season of improvement for the Boulder City High School boys soccer program (3-11-1 overall, 3-7 conference).

Dropping contests to Chaparral on Oct. 26 5-2 and to Adelson School on Thursday Oct. 27 1-0, the Eagles remained to stay tough despite playing against higher class opponents.

Getting a boost from their youth movement, junior Patrick Hood and sophomore Jacob Sanford would both contribute with goals against the Cowboys, ending both of their seasons on high notes.