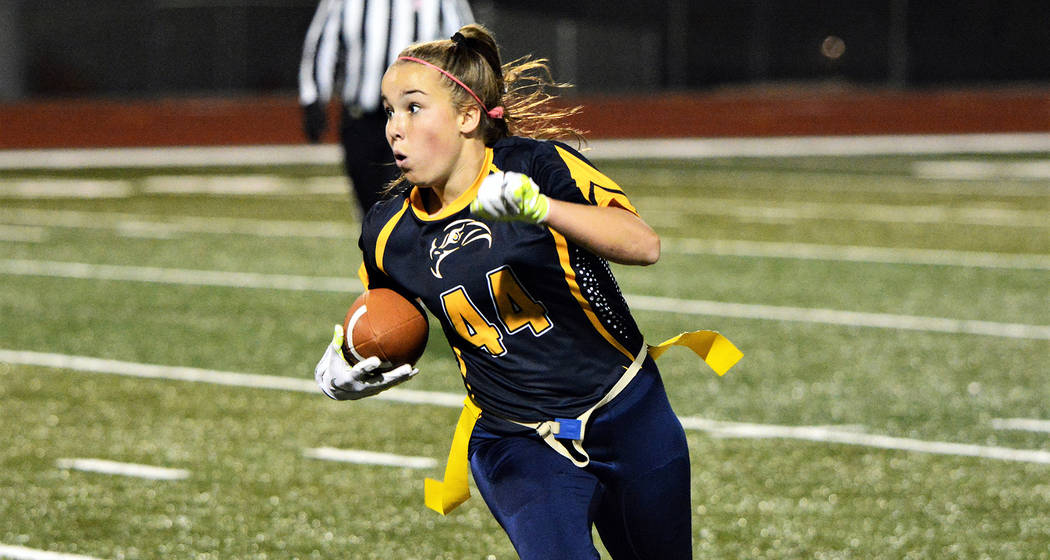 Despite giving up a garbage-time touchdown to end the game, the Lady Eagles (4-1) dominated the Miners on both sides of the ball.

“I think the team played well,” senior Ryann Reese said. “We have been practicing really hard in order to get where we are now, but I feel like we have more to show. I’m very proud of my team and the way our season is going right now.”

The Lady Eagles are riding a four-game winning streak after their opening-season loss to 4A Southeast Career Technical Academy.

Steering the ship for the Lady Eagles, with much improved play behind center, junior quarterback Makaela Perkins completed 16 of 22 passes for 105 yards Monday, throwing a pair of touchdown strikes to Reese.

“Makaela’s been doing a much better job,” head coach Kevin Ruth said. “She starting to feel a lot more comfortable with the offense that coach (Chris) Morelli is trying to set up. Today, we relied a little bit more on the run, but when we need to throw it, she’s done a really good job and made some good decisions.”

A versatile offensive weapon, Reese finished with seven catches for 30 yards, while rushing for 99 yards on 15 carries. Having a breakout game for the Lady Eagles, junior newcomer Makena Arboreen led the way with 158 yards and a touchdown on 20 carries.

Newcomer Jasmyn Curl rushes for 22 yards and a touchdown on two carries to help the Lady Eagles remain undefeated in league play.

“We had a lot of girls graduate last year who were a big part of our team, but we had a lot of new athletes show up ready to play hard and they are doing exactly that,” Reese said. “Being 4-0 is really good for us, but we have to keep our heads low and keep grinding.”

Looking like a rejuvenated team after posting an 8-8 record last season, the Lady Eagles also defeated league opponents Mojave 13-12 on Dec. 5 and Valley 20-12 on Friday, Dec. 7.

“I think a couple of our games have been closer than they needed to be this year, but one thing our girls don’t do is panic,” Ruth said. “In the past if we were down or in a close game, we would all hit the panic button; where this year, even if we get stuff or another team scores first, we just go back out there and keep fighting.”

On defense, Arboreen generated two sacks, while Reese and Rinella each had one. Reese and Sitko both intercepted passes.

Off until the conclusion of winter break, results from the Lady Eagles’ rivalry game today, Dec. 13, against Moapa Valley will appear in next week’s issue.