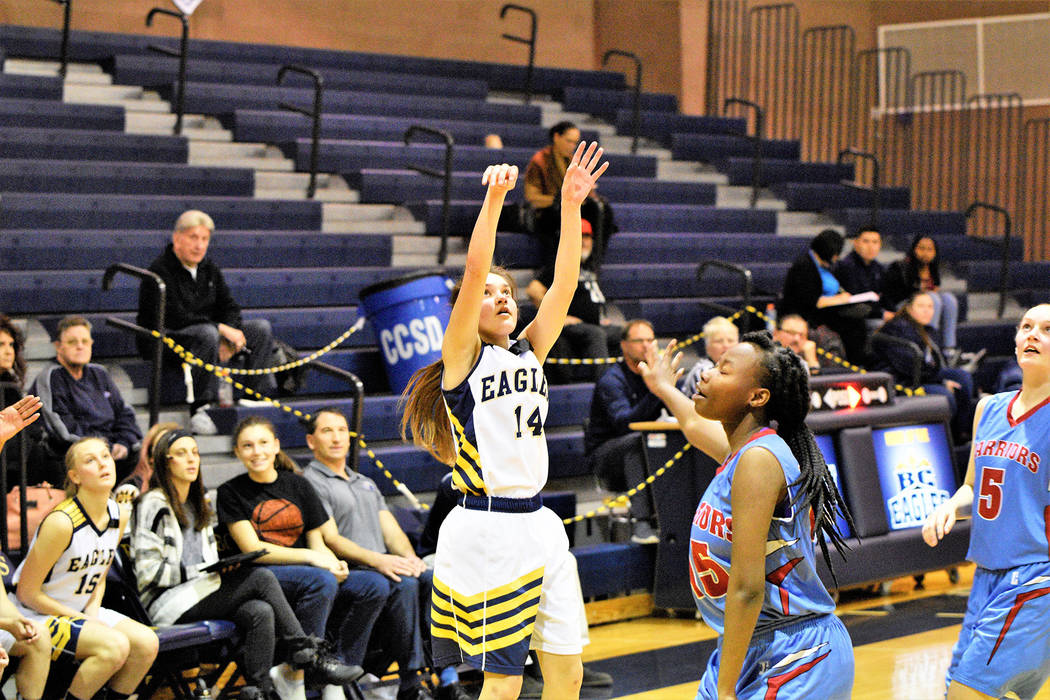 (Robert Vendettoli/Boulder City Review) Junior guard Keely Alexander follows through on a 3-point attempt against Western in the first round of the Class 3A postseason on Tuesday, Feb. 19, 2019. The Lady Eagles won 67-44.

Proving their worth as the No. 1 seed in the 3A Sunrise on Tuesday, Feb. 19, night, Boulder City High School girls basketball routed visiting Western 67-43 in the Class 3A Southern Region quarterfinals.

“We played well tonight,” head coach Kirk Estes said. “We controlled the game from the opening tipoff all the way through. The girls are playing really well.”

Winning their first playoff game since 2014, the Lady Eagles flexed their muscles against the Warriors early, using a 24-4 second-quarter run to put the game out of reach with ease. With momentum on their side and the monkey off their back, the Lady Eagles are focused on the next game.

“It’s a really big win for our program,” Estes said. “It was nice to have an easy game to start the playoffs but from here on out we know every game is going to be a win or go home game.”

Peaking at the right time, the Lady Eagles are battle tested and ready for the postseason after securing their first league championship since 2014 on Friday, Feb. 15, with a road victory against rival Moapa Valley.

Playing for the top overall seed in a winner-takes-all showdown, the Lady Eagles responded with a decisive 53-41 victory.“The Moapa Valley game for us last week was really big for us,” Kirk Estes said. “As it worked out, the winner of that game was going to be the league champion and the girls went put there and just performed. They played really good and played great Boulder City defense.”

No slouch on the offensive end either, Howard led the way against the Pirates with a 28-point effort in an unstoppable display of dominance in the paint.

“Ellie’s been outstanding the entire conference season,” Kirk Estes said. “When Moapa tried to take her away in some aspects, Keely and Madison stepped up. They tried everything they could to mix it up on Ellie and realized that the nice thing about our group is that we have five girls who can all score.”