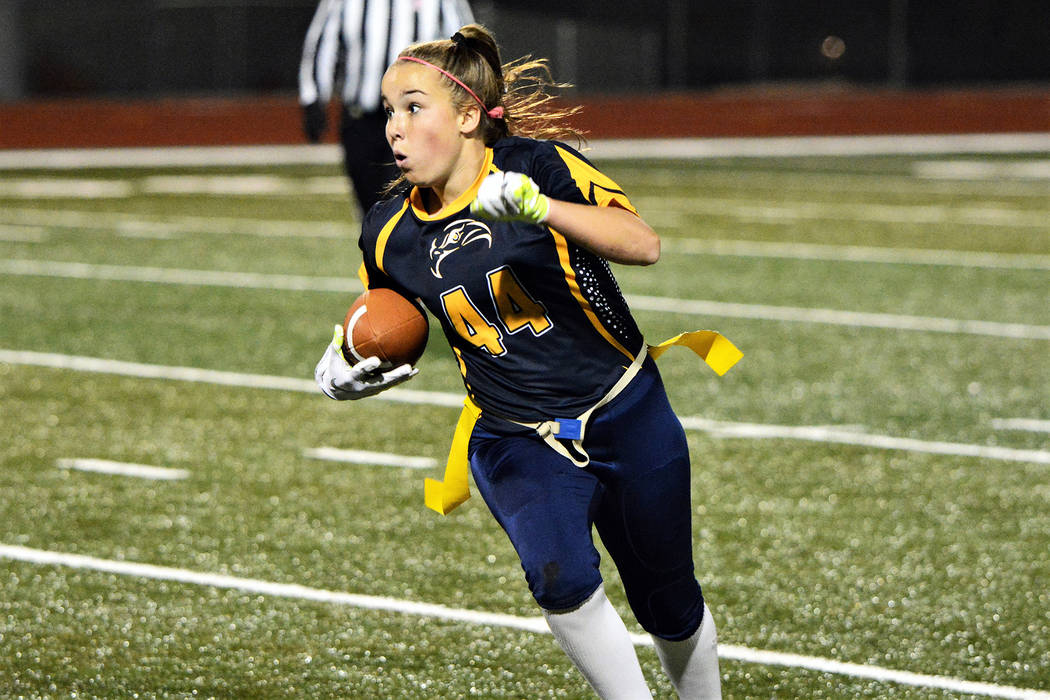 Boulder City High School junior Makena Arboreen is using her speed and experience as a soccer player help the Lady Eagles regain their position atop the flag football standings.

Riding a five-game winning streak into 2019, Boulder City High School’s flag football team is experiencing a resurgence after a pair of down seasons compared with its lofty standards.

The gold standard in Nevada regardless of classification, the Lady Eagles won state championships in 2015 and 2016, finishing with a combined record of 43-0. Since then, the program has stayed competitive but unable to relive past glory.

Finishing in fourth place in the 3A Sunrise League with first-round playoff exits the past two seasons, the Lady Eagles have been searching for the right mix to get back to the top of the classification.

“We have managed to figure out our jobs and work as a team with lots of hard work and time,” senior Ryann Reese said. “Each one of the girls plays the role they are suppose to and it pays off.”

Sitting atop the 3A standings with a 5-0 league record, the Lady Eagles are tied with rival Virgin Valley and Del Sol for first place. Sporting a stingy defense and a balanced offensive attack, a home playoff game, which has eluded Boulder City the past two seasons, seems well within reach.

Suffering their only loss this season to 4A opponents Southeast Career Technical Academy, the Lady Eagles have played lights out on defense, allowing no more than 14 points in a contest.

Led by Reese (21 tackles and three interceptions with a defensive touchdown) and junior Clarissa Sitko (classification leading 47 tackles), the Lady Eagles are holding teams to 11.8 points per game this season.

Juniors Emily Rinella (34 tackles, one sack) and Makena Arboreen (26 tackles and two sacks) have also been key on defense.

Playing a balanced style of football, Reese has been a Swiss Army knife for the Lady Eagles’ offense, allowing others to prosper around her. A playmaker with the ball in her hands, she leads Boulder City in rushing and receiving, generating 544 rushing yards and five touchdowns on 59 carries, while catching 24 passes for 180 yards and three touchdowns.

“I think that other teams are going to focus more on Reese with what she has done so far this year,” head coach Kevin Ruth said. “We need to continue to spread the ball around to the other athletes that we have.”

Complementing Reese out of the backfield has been Arboreen, who has transitioned nicely from the soccer field to the gridiron in her first season, rushing for 356 yards and a score on 62 carries.

“From playing soccer for 11 years to this being my first year playing flag (football), the transition has been pretty challenging,” Arboreen said. “There are so many different rules and different plays, but my teammates and coaches have definitely helped me tremendously understand the game and have helped get me to where I am right now as an overall player. I think transitioning from soccer as a midfielder, knowing where my teammates were at all times and always having to run at full speed with the ball has helped me succeed as a running back in flag.”

Playing soundly on both sides of the ball, the Lady Eagles are once again a program on the rise. Looking to continue their success into the second half of the season, Ruth acknowledge the team’s resurgence but knows there’s still work to be done to meet their lofty expectations.

“We have a bunch of girls that are aggressive and that has helped a ton on defense,” Ruth said. “We need to start scoring more though. We can’t count on winning games by a touchdown. We have three tough games coming up and the teams that we have played already are going to get better and so do we.”

First place in the classification will sort itself out quickly when the Lady Eagles host Del Sol on Wednesday, Jan. 9, followed by a road game at Virgin Valley on Friday, Jan. 11.