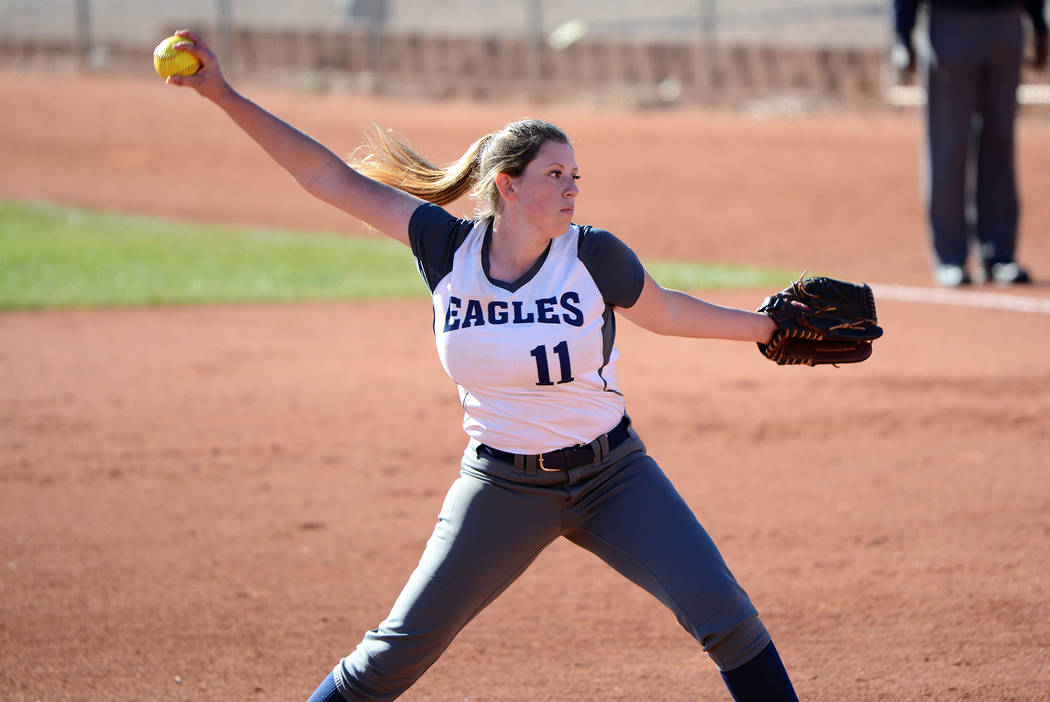 (Robert Vendettoli/Boulder City Review) Abby Giunta, a senior at Boulder City High School, throws a strike against Western on March 13 in the Lady Eagles' 19-4 victory. Giunta struck out four batters on the day.

“The girls have played well these past couple of games,” head coach Angelica Moorhead said. “(They are) doing their job at the plate. They need to continue taking care of our pitchers.”

Providing plenty of run support so far this season, the Lady Eagles also routed Del Sol 18-0 on Monday, March 18, and Western 19-4 on March 13.

“Winning the three games is boosting our confidence and showing our team that we can really go far this season if we work together,” senior Ryann Reese said.

Reese has been on a tear lately at the plate, batting 4 for 5 with four runs batted in and a home run against Mojave, while batting 3 for 3 against Del Sol and 2 for 3 with three RBIs against Western.

“I’m so proud of all our new players that on our team,” Reese said. “Each girl has a special role and I believe they are succeeding. They are getting better day by day and our chemistry is getting better, too.”

Already solid against Nevada programs, the Lady Eagles traveled to Utah for the March Warm-Up Tournament on Friday and Saturday, March 15-16, where they finished 1-4 against a handful of quality teams.

Defeating South Summit 10-9 in the tournament opener, the Lady Eagles remained competitive despite their record, narrowly falling to San Juan 17-16. The Lady Eagles suffered losses to Stansbury 18-11, Uintah 13-1 and Cedar 14-5.

“After losing to Pahrump, then having a rough weekend in St. George, we are trying to work off mistakes and get better,” Moorhead said.

“We haven’t had practice in over a week due to all our games so we are trying to fix things each game. Our first league game is in a week, beginning with Chaparral. Hopefully, most of the kinks will be straightened out and we will be ready to go.”

Getting four more preseason games to prepare for league play, the Lady Eagles will resume their season Friday, March 22, with a home game against SLAM Academy and another on Monday, March 25, against Democracy Prep, before traveling to face 4A opponents Coronado and Silverado on Tuesday and Wednesday, March 26 and 27.