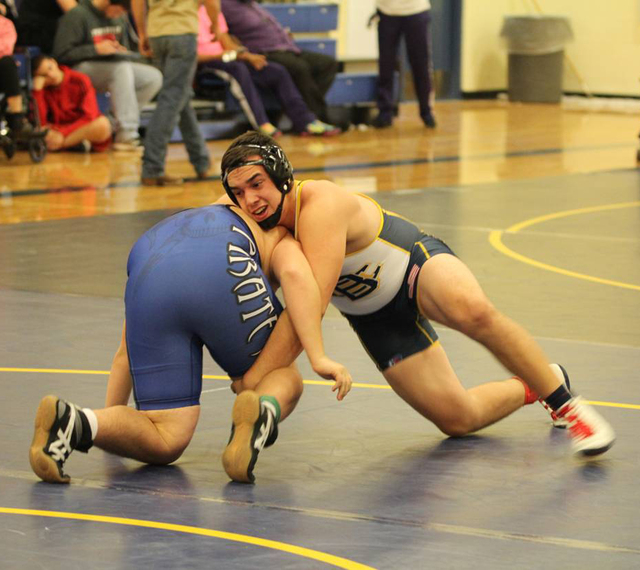 Team Boulder coach Jim Cox has been preparing his team all season for the postseason, scheduling tough dual matches and four rugged tournaments.

The Eagles approach the season’s final two weeks, Cox said, in top form and ready to host the Division I Southern Region Tournament at home Feb. 6-7.

“It’s huge that we get the region at home because we can have all our fans and community out there,” Cox said. “The kids have worked hard in practices, in matches and in tournaments, always trying to get better. We have another tough tournament in Utah and then end the season on the road against rival Virgin Valley, so there is still work to be done and room to improve.”

The Southern Region tournament’s opening rounds begin at 3 p.m. Feb. 6. The middle and championship rounds are at 9 a.m. Feb. 7.

But first Team Boulder has a big challenge ahead Friday in the Great Basin Grapple in Delta, Utah. The Eagles close the dual-meet season Jan. 30 at home against Durango and on the road Feb. 3 at Valley Virgin.

At 182 pounds, Nelson Van Diest pinned his opponent in 1:21, but at 285 pounds, Jack Rozycki lost a 9-7 decision in overtime with only two seconds remaining. The senior, trailing 7-4 with only 21 second remaining in the third period, got a one-point escape and a two-point takedown to tie the match, 7-7, as time expired to force an overtime.

Here is how Team Boulder shapes up for the final two weeks and into the region tournament at Boulder City.

■ 106 pounds: DJ Reese is 18-8 this season with a first-place and a fifth-place finish in two tournaments.

■ 113 pounds: Brady Branscum has a 13-2 record, a first-place and two top-10 finishes in tournaments.

■ 120 pounds: Jimmy Brown is 19-9 with one second-place finish in a tournament.

■ 126 pounds: Colin Fox is 22-5 and a state-title contender. He had first- and second-place finishes in two tournaments.

■ 132 pounds: Mike Morelli has a 15-2 record and one first-place finish in a tournament.

■ 138 pounds: Tyler Rushworth is 20-6 with a first-place and third-place finish in tournaments.

■ 145 pounds: Dylan Viera is 18-8 and has one second-place finish in a tournament.

■ 152 pounds: Patrick Garvin is 19-5 with a second- and third-place finish in tournaments.

■ 160 pounds: Dylan Dennington is 8-2 and Bryan Foster is 14-5. Foster also finished first in one tournament and will represent the weight class.

■ 170 pounds: Alex Pappageorge is 15-5 and had one first-place finish in a tournament.

■ 195 pounds: Jacob Jurgschat is 19-6 with a first- and second-place finish in two tournaments.

■ 285 pounds: Jack Rozycki is 21-5 with one first-place finish and one third-place finish in two tournaments.

“We have a lot of talented wrestlers and we are hoping to do well on our home mats and advance as many to state as we can,” Jurgschat said. “We still have a few matches left to fine-tune everything but everyone is working hard and we think we can do well in the region.”

In the Liberty junior varsity tournament on Jan. 17, six Eagles placed in the top four positions.