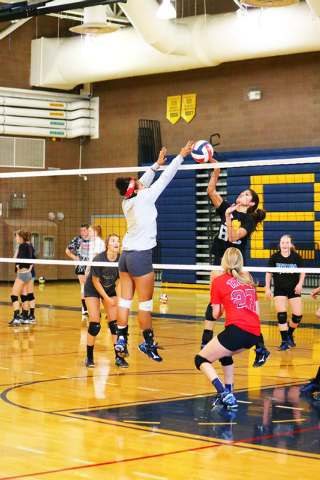 Players have used the camp in the past to gain experience that helped them win the Sunrise League the past three years, and to advance to state tournament in four of the past five seasons.

“The camp is an important part of our summer in preparing for the new season,” said senior Kinsey Smyth. “It was a great help to me and a lot of other players last summer and I think it was also good for everyone this summer. It helps us with our skills and in team chemistry building. Our team is filled with lots of great athletes with a lot of experience on the court.”

The three visiting coaches were Amanda Bible, a former setter for St. Mary’s University who played professionally for several years; Bonita Wise, a former All-Conference middle blocker at the University of Cincinnati who’s played on the pro circuit for more than 10 years; and Lindsey Stalzer, a former All-Conference middle blocker from Bradley University. Stalzer finished as the all-time career kills leader in the conference and was selected as the conference’s player of the year.

“These are excellent coaches who bring much experience and skills to the camp and share it with all the girls,” Boulder City coach Cherise Hinman said. “They just help make us a better team. We took most of the summer off, but with the camp and open gym this month, we are ready to get back to business and look toward this season.”

Last season, the Lady Eagles won the Sunrise League after finishing with a 22-11 record, including a perfect 12-0 record in league play. They advanced to the state playoffs for the 17th consecutive year, and reached the state tournament four of the last five years. They lost to Dayton in the state semifinals last year.

“Making the playoffs is not the overall goal,” Smyth said. “Boulder City is a solid enough program to do that, but it is doing something memorable when we get there. We don’t just want to make the playoffs, we want to win in the playoffs.”

The graduation of league MVP Whitney Barlow means that Smyth and Sam Hanson will have to fill the spot at the net. Defensive specialist Alyssa Ybarra returns to bolster the back line.

“I am very excited for the season to start and to get back on the court with my teammates,” Ybarra said. “The plan for the season is to stay strong as a team and listen to coach Hinman. She is a great leader and she can help us get back to the state tournament and as a senior, I really want to go all the way to state in my final season. We have the players to do it again.”

Official tryouts are Aug. 18-20 and practices begin Aug. 21. Information is available at www.bouldercityvolleyball.com.