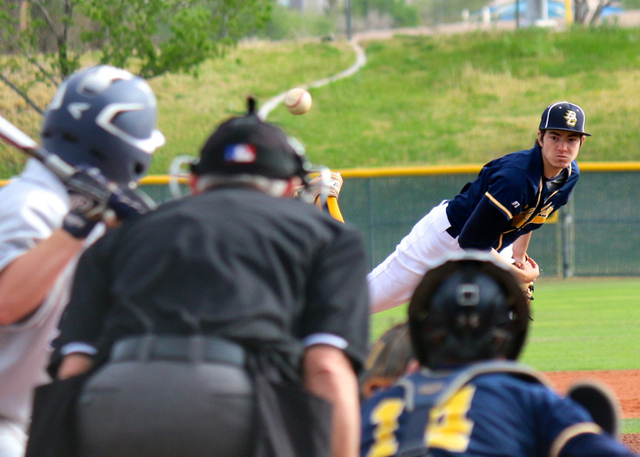 Boulder City High’s baseball program split its spring break tournament 2-2 against California teams in the Blazer Spring Bash this past week, leading them up to a firing 19-1 league victory against Sunrise Mountain on Monday.

“We had a very good week at our spring break tournament,” head coach Bobby Reese said. “We saw some very good pitching and learned what we need to work on. I am pleased with where we are hitting. We are headed in the right direction at the plate.”

Run ruling Sunrise Mountain in five innings, the Eagles’ bats got cranking early and often, opening the game with four runs, while collecting 21 hits overall against the Miners’ pitching staff.

Leading the charge for the Eagles on Monday was sophomore Aaron Kehoe, who batted a perfect three-for-three with four runs batted in, while senior Steve Mull batted two-for-four with a pair of doubles and three RBIs.

Sophomore Patrick Hood also hit a home run in his first varsity at bat since being called up to the team. Hood went one-for-one with his three-run shot.

On the mound, junior starting pitcher Jake Hubel was also at his best Monday, despite at times out-of-control winds coming at him. Picking up his first victory of the season, Hubel pitched a five-inning gem, striking out nine batters while only allowing one run.

“When our team got out onto the field we were confident with our bats, especially with the tail wind to left,” Hubel said. “I knew pitching would be tough against the gusts coming at me, but with the support of my team, I was pumping strikes. I was down a little bit in the first inning, but I turned it on the next and heard my shortstop Steve Wagner say, ‘There’s the Hubel I know!’ (I’m) glad to get this win for my team.”

Generating momentum from their spring break tournament experience, the Eagles advanced to 6-4 on the season and 2-0 in the Division I-A Sunrise conference,following Boulder City’s preseason gauntlet stacked with Division I programs.

In their first two games over the break, the Eagles picked up victories against Rim of the World (Calif.) 6-4 and Liberty (Calif.) 15-0, before dropping their final two contests against Banning-Wilmington (Calif.) 14-0 and Birmingham (Calif.) 8-2.

“I like the way we played this past week,” senior pitcher Wagner said. “We played very well and I was proud. Playing high-level teams is very important to us, especially for nonconference games so we can keep our level of play high. We always say, if you want to be the best you have to play with the best.”

Still following a 2-2 split against premier out-of-state competition, Reese has found areas for his team to improve upon in order to capture its goal of hanging its first Division I-A state championship banner since 2006.

“Right now our problem is defense,” Reese said. “We need to take more pride in our defense and clean some things up. If not, it’s going to cost us. We have time and the team understands that defense needs to become a priority. Scoring a ton of runs and winning with a slow pitch softball score is fun but it’s not going to help us win a championship that way.”

Heading into the heart of the league schedule, the Eagles currently sit in a four-way tie for first place in the conference with Chaparral, Southeast Career Technical Academy and Moapa Valley. The Eagles will resume league play Friday on the road at Virgin Valley, but first Reese will try to give the Eagles another opportunity to improve against an out-of-state opponent when they face Northridge (Colo.) today.

“Our goal is to work hard and compete,” Wagner concluded. “We want to win a state championship. In order for that to happen we have to keep focusing and playing hard and playing as a team.

We have to continue to fight against tough opponents and put our best foot forward. We are very excited to see what this year will bring us.”