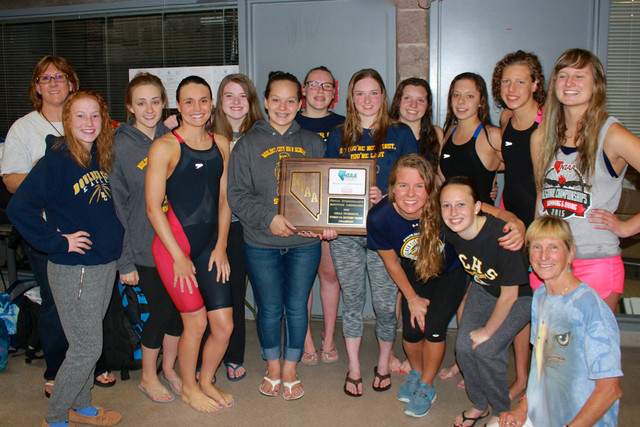 The boys team was runner-up with 329 points, just behind Faith Lutheran High School with 366.

According to head coach Sara Carroll, many swimmers beat I-A regional records and BCHS has almost all division records.

“All the kids swam really well at regionals, but especially the boys have to do that again at state,” Carroll said. “Boys have a chance to win state but they need to be tough and focused and the stars have to align perfectly!”

“Girls should dominate at state, even though we only have seven, though they are in a lot of events and are in relays seeded first,” Carroll said. “Every girl made two individual swims.”

“State is the most exciting meet of the season. We’re all antsy to head up north,” said Hubel, a senior. “In the past, our team has rocked it up there. It’s the perfect pool to finish up my high school swimming career at.”

Hubel also was announced as the 2015 Girls Swimmer of the Year. She has won that honor all four years she has swam on Boulder City High School’s swim team.

“Preparing for these high-level meets takes the ability to stay calm,” Hubel said. “Knowing that I’ve worked up to this meet all season gives me peace of mind. I try to be confident in all the preparation that I’ve done in the pool and all that the coaches have invested in me throughout the season. When I step up on the blocks at state, I’ll be ready.”

Abby Sauerbrei will join the 200-yard medley relay and 400-yard freestyle relay teams. Individually, she placed third in the 200 individual medley with a time of 2:13.30, and placed first in the 100-yard butterfly, swimming 1:00.01. She will participate in four events at state.

Gebhart finishes off the 200-yard medley and 400-freestyle relay teams. She also will swim in the 500-yard freestyle after finishing first at regionals with a time of 5:04.41, and the 100-yard breaststroke, swimming 1:11.94 to also claim first place.

“Big goals have been set for the girls this year,” Hubel said. “It’s no guarantee for any of us that it’ll be a perfect meet, but we’re all going to be suited up and shaved down, ready to leave everything we’ve got in the pool. I can’t wait for the best times and new records that we’re hoping to see.”

“It’s going to be a challenge for (the boys),” she said. “It’s the first year in a long while that the boys are expected to struggle for the state title. Last year, we lost a dense group of seniors. They are up against some schools in our division that might just have enough boys competing at state to have what it takes to beat them.”

Sam Sauerbrei will join Lara in the 200-yard medley relay as well as the 400-yard freestyle relay. For individual events, he will swim in the 200-yard individual medley and the 100-yard breaststroke, after placing first with times of 1:53.60 and 58.55, respectively.

He also was announced as the 2015 Boys Swimmer of the Year.

Pendleton will join his teammates in the 200-yard medley and 200-yard freestyle relays.

“Fewer swimmers qualified for state than in years past, but there is a lot of talent in each of the Eagles that are going,” Hubel said. “It’s going to take a lot of focus to win another state title. We’re going to have to buckle down and get fired up as a team. We’ve already put all the hard work and preparation in during the season. Now it’s time to take the cake out of the oven and see what we’re capable of.

“We’ll have all of our teammates, that unfortunately won’t be joining us, and an entire community rooting us on. Just because we move on to state and they don’t doesn’t mean their season is over. We have so many cheerleaders!”