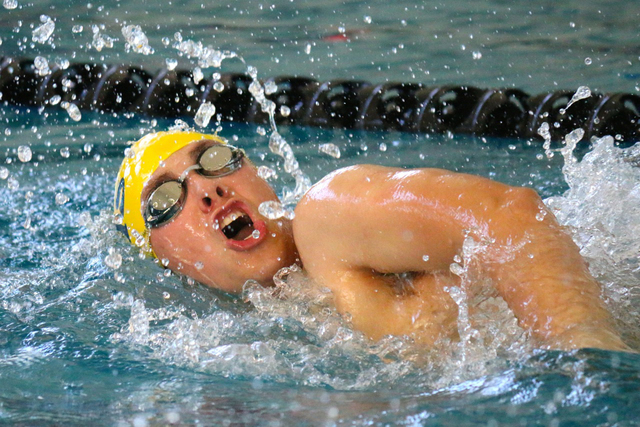 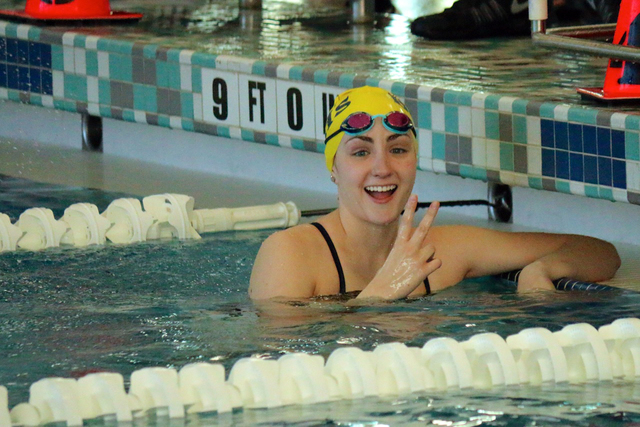 Swim season kicked off this past week for both of Boulder City High’s state championship hopeful squads, with a meet against Southeast Career Technical Academy March 17 at Heritage Park.

Aiming for their sixth consecutive trip to the state tournament in May, the three-time defending Division I-A champion Lady Eagles were back to their dominant ways against the Roadrunners, taking a handful of events home with them for their first victory of the season.

“We expect to be right back in the mix of things again this year,” head coach Sara Carroll said. “We lost some key pieces but we have the experience to get back there.”

Making their debuts for the Lady Eagles, freshmen Aimee Garcia and Rose Pouch got off to a hot start against the Roadrunners, something coach Carroll was hopeful the duo would be able to do in a attempt to replace the ample amount of talent departed from graduation.

Junior Mandy Gebhart was also at her best, coming back as one of the Lady Eagles’ key returners this season. A state contributor last season for Boulder City, Gebhart seems well on her way to leading the pack once again following victories in the 200-yard individual medley and the 100-yard backstroke.

“The girls did a really nice job I thought,” Carroll said. “We came out strong and competed hard.”

For the five-time defending Division I-A champion boys, the Eagles made great strides in their quest to appear in their seventh consecutive state meet, routing the Roadrunners handily, as well.

“State is always the goal for our team,” Carrol said. “We have the swimmers to do it, but we’re going to need contributions from everyone this year if we want to get back there.”

Senior Nick Lara, who has been a key contributor for the Eagles the past three season, was at his best March 17, placing first in the 200-yard individual medley and 100-yard breaststroke.

A Navy commit, Lara’s contribution will certainly be relied upon heavily again this season.

Hoping to one day fulfill the shoes left behind by Lara is freshman Paco Cuevas, who showed early on that he can be a key contributor for this season’s team.

Placing first in the 200-yard freestyle and 100-yard butterfly, the future looks particularly bright with another up and comer on deck.

Junior Braden Klouse also had a great day in the pool capping off the Eagles’ efforts with victories in the 50-yard freestyle and 100-yard freestyle.

“I thought everyone overall did a great job competing,” Carroll said. “It was nice to see great efforts from everyone.”

Carroll also noted that both senior Jared Mooney and junior CJ Herrera have improved heavily throughout past weeks, while praising newcomers freshman Ashleigh Wood, junior Ben Missel, senior Noah Moorhead and freshman Chandler Larson for their efforts to contribute to the program.

Both swim programs will be back in action on April 2. for a league match against Desert Pines at the Henderson Multigenerational Pool.