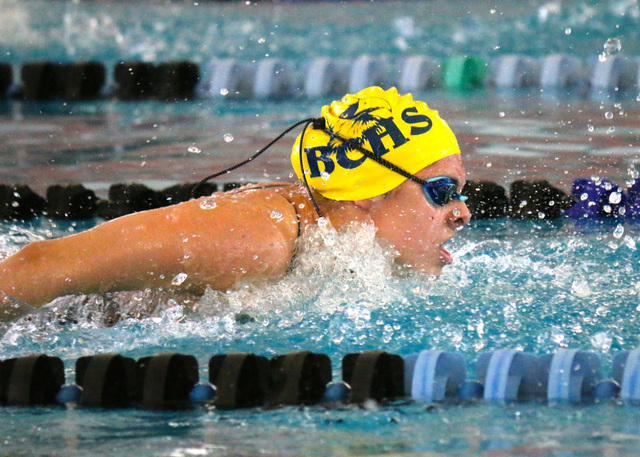 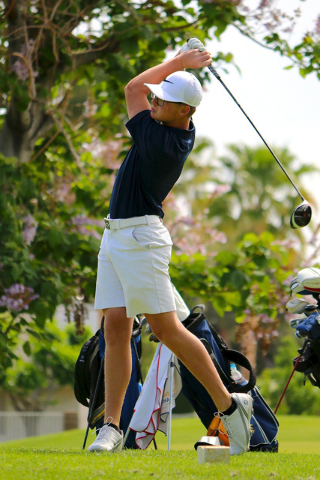 Boulder City High’s boys and girls swim programs were in action Saturday, with both Division I-A leading programs beating up on Division I opponent Valley.

For the boys, senior Nick Lara was at his best, taking home first place in the 200-yard freestyle and 100-yard butterfly with winning times of 1:46.76 and 53.73 seconds, respectively.

For the girls, the Lady Eagles won soundly over the Vikings, behind strong performances from juniors Mandy Gebhart and Montana Lloyd.

Pairing up for four first-place finishes, Gebhart won her 500-yard freestyle and 50-yard freestyle events, while Lloyd took first in the 200-yard individual medley and the 100-yard backstroke.

Cruising their way through the first half of the season, the Eagles will be back in action Saturday against Division I-A opponent Virgin Valley at Heritage Park.

Following a solid showing April 13 in the Division I-laden Southern Nevada Invitational at the Dragonridge Country Club, in which they were one of only two Division I-A participants, Boulder City High’s boys golf program finished the week off strong with a pair of meet victories.

Junior Kyler Atkinson was the lone Eagle to place in the Invitational, finishing the day with an overall score of 156, shooting a 75 during round one and an 81 during round two on the par-72 course.

Atkinson also led the Eagles to a Sunrise meet victory over Needles, Virgin Valley and Moapa Valley with a score of 71 on April 14 and against Division I opponent Basic with a high score of 41 on Monday.

Lending Atkinson a helping hand in the Eagles’ conference victory was junior Cade Neilson, who finished fourth with a score of 82 on the par-72 course, while junior Samu Jancuk and sophomore Jackson Wright finished seventh and eighth, respectively, with scores of 87 and 88.

Against the Wolves, Jancuk finished tied for second with a score of 43.

Following three Sunrise League wins already this season, the Eagles look to resume their dominance on Monday when they travel to Las Vegas National golf course.

Taking home second place in both of his events, Pfeiffer had a leap of 19-9 in the long jump and a leap of 37-11.5 in the triple jump, while Green placed first in the high jump event with a leap of 5-8.

Rounding out the Eagles’ efforts were the Krausman brothers, where sophomores John and Alex dominated the distance competitions. In the 800-meter, John and Alex took first and second, respectively, with times of 2:12.4 and 2:17.7, while John placed second in the 400-meters and Alex placed seventh.

For the girls, junior Jordyn Trobiani was everywhere to be found on the leaderboard, placing within the top five in all four of her individual events.

Trobiani took home first and fourth place in the 200-meter and 400-meter dash, the first time she’s ran those events this season, while placing third in the high jump and second in the triple jump.

Sophomore Sierra Selinger also had a strong performance for the girls, continuing her distance dominance over the Division I-A field, finishing first in both the 1600-meters and 3200-meters with time of 5:25.1 and 13:16.3, respectively.

Senior Bayden Huxford placed first in the pole vault with a leap of 7-6.

Rounding out the Lady Eagles’ efforts, the hurdles duo of senior Lauren Mullins and junior Kenadee Bailey were at their best, as well as the shot put and discus duo of sophomores Nicole Valle and Maggie Roe.