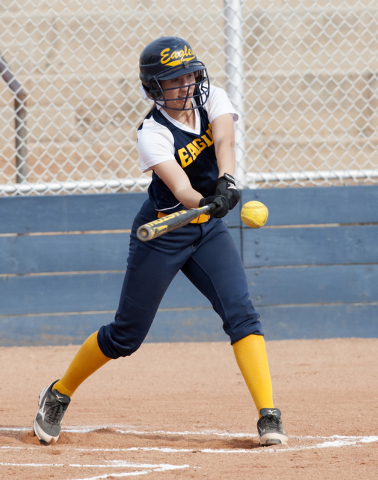 The game was closer than expected through three innings as the Lady Eagles softball team led Virgin Valley 2-0. The Lady Bulldogs are 1-15. But the Boulder City hitters came to life in the fourth and fifth innings, scoring four runs in each inning.

Lily Osman had three hits and one run batted in.

Boulder City coach Angelica Moorhead and her players are aware their four league victories have come against the bottom four teams in the league and that challenges lie ahead.

“Things start getting tougher this weekend,” Moorhead said. “Sometimes the competition in our league isn’t the toughest and it is hard for the girls to stay focused and then when we play someone and we need that mental toughness, we struggle to find it.”

Toughness is what they will find in their opponents’ dugouts this weekend as they play at least five games in pool play and double elimination in the Spring Jamboree tournament at Majestic Park in Las Vegas.

The Division I-A Lady Eagles are one of the smallest schools in the three-day competition among 36 teams from seven states. Most of the Nevada teams are from Division 1.

“We will find out a lot about ourselves against this competition,” Moorhead said. “There are some excellent teams from out of state that we will play and the added competition against these teams will only make us better when we return from spring break and close out the Sunrise League schedule and look ahead to our playoffs.”

The Lady Eagles will play at 3:30 p.m. today against Southeast Career and Technical Academy at Rodeo Park in Henderson. They travel Friday to play at Eldorado.

Jordan Moorhead and Charlie Masterson each went 4-for-4 as the Lady Eagles defeated the host Lady Dragons 18-0 in five innings Friday. Moorhead was the winning pitcher. Alyssa Ybarra went 3-for-5 and Bryanna Lopez was 2-for-4 with two doubles.

Luke Logan shot 1-under-par 71 to lead Boulder City to victory in a Sunrise League match March 18 at Boulder Creek Golf Course. Kyler Atkinson shot an 83 and Hunter Ulibarri shot 85 for the Eagles, who had a winning low score of 415. Moapa Valley was second at 544.

The baseball team will play today and Friday before leaving Saturday in a weekend tournament in California.

Baseball and softball action resumes in the Sunrise League on April 7 at home against Chaparral.

The boys golf team and the boys and girls swimming teams will be off until April. The golfers tee off April 6 against Las Vegas at Boulder City Municipal Course. The swimming teams compete April 11 against Sunrise Mountain and Virgin Valley at Henderson Multigenerational Indoor Pool.

The boys and girls track and field teams will compete Friday in the Grant Bushman Invitational at Overton and won’t compete again until April 8 in a four-team meet with Clark, Faith Lutheran and Moapa Valley, also in Overton.