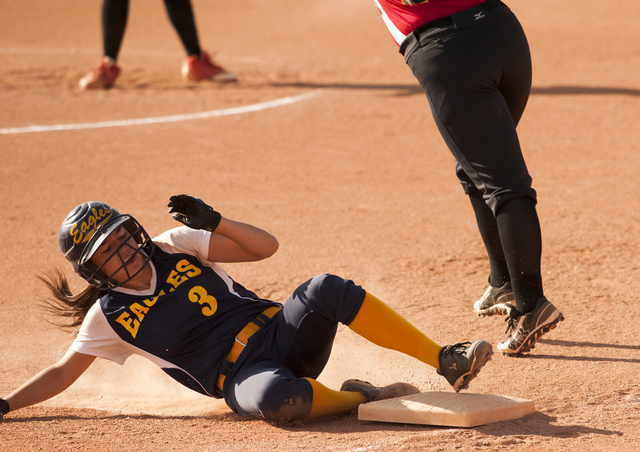 The Lady Eagles softball team continues its winning season, putting it further ahead in first place for league standings.

The Boulder City softball team is first in Sunrise Division I-A standings with a 12-0 league record. The second-place team is Moapa Valley, which has a 9-3 record.

The Lady Eagles pull further ahead of other schools in the league with every game they play. Last week, was no exception.

The Lady Eagles led 6-1 after three innings and never looked back.

Kylee Hamel and Masterson each had two RBIs, while Jordan Moorhead, Lauren Axelson, Bryanna Lopez and Jerra Hinson all had one.

After the win against Tech, the Lady Eagles hosted Bonanza on Friday night, earning another win, They topped the Bengals 17-0.

Masterson pitched another complete game, throwing 69 pitches, 54 for strikes, and struck out nine.

Micayla Gegen was 1-for-3 at the plate with four RBIs. Teammates Lopez and Hinson each brought in three runs, while Alyssa Ybarra and Lily Osman both brought in two.

It was another complete game for Masterson; she threw 65 pitches, 46 for strikes, with six strikeouts.

Ybarra was 1-for-4 at the plate with two RBIs. Masterson, Lopez, Hinson and Gegan each had one RBI.

The Lady Eagles played their last regular-season game Wednesday night against Moapa Valley, but the results came too late to be published.

As the Boulder City swim teams near regionals, the boys and girls teams had some quality runs with swimmers beating their seed times to better their chances for regional competitions.

Last week, the boys and girls teams won their meets over Southeast Career Technical Academy and Desert Pines on Saturday.

Jessica Purdy finished first in the girls 200-yard freestyle, recording a time of 2:08.67, and Sam Sauerbrei swam 1:49.10 to place first for the boys.

Up next, Boulder City is focusing on the Saturday’s Last Chance meet. Swimmers have one last chance to best their times and qualify for regional or state competitions.