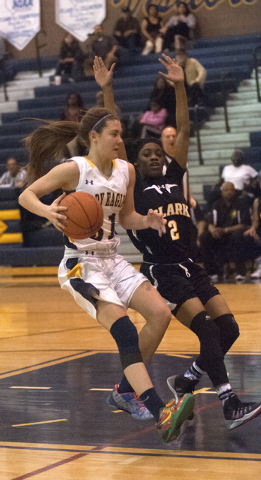 The Boulder City girls basketball team’s season began with hopes of making a return to the state tournament for a third consecutive year, but instead it ended Feb. 18 with a quick exit from the playoffs in their first game.

This was not the way it was supposed to end.

Bobbi Floyd scored a game-high 29 points as Clark defeated the Lady Eagles, and her teammates Ariel Hamilton and Shyanne Carter-Wade each added 10 points to account for 49 of the Chargers’ points in a 61-56 victory.

“As (2013-2014 teammate) Jana Williams said after our loss in the state final game last year, I would rather lose in this region game with my team then go on to state with any other team,” senior guard Katlyn Daly said. “It’s very disappointing to have such a great season and lose so early in region. We worked so hard to just get kicked out so easily. It just wasn’t our game.”

Clark (12-14) advanced to play Spring Valley, but lost 67-60, losing to the Grizzlies for the third time this season.

Spring Valley (28-1) went on to defeat Faith Lutheran 63-55 Saturday in the regional final. Both teams advanced to the state tournament.

Boulder City trailed Clark by 1 point at the beginning of the final quarter, but was outscored 17-13 during the period.

The loss marked the end of one of the best guard tandems in Boulder City sports history. Daly and Ybarra were the starters since their freshman year, they played together in the same back court for three years at Garrett Junior High, and played as teammates and opponents since the playing in the Boulder City Little League during their elementary school years.

“The hardest part about ending this season is the thought that I will never play with any of those girls every again,” Daly said. “I will especially miss Alyssa and Megan. I’ve played with them for so many years

“I don’t know how I’m going to survive without them. This last season has been one to remember and I am thankful for my coaches and team for being my family away from home. I am truly going to miss them.”

The Lady Eagles, once 11-0 in the Sunrise League and favored to be a No. 1 seed, lost three of their final four games of the season and the one they won, they had to survive Virgin Valley in overtime.

The two league losses to Desert Pines and Chaparral cost them the league championship and the No. 1 seed. The loss to Clark ended what was a difficult two weeks for the players.

“I can’t believe the season is over,” Daly said. “We just lost our chemistry and our outside shooting in the final two weeks. It happens, we are all disappointed, and as a senior it really hurts.”

Coach Paul Dosch’s team ended 18-9 overall and 12-2 in the Sunrise League. The Lady Eagles finished tied with Chaparral for the league lead, but the tiebreaker belongs to the team that wins the teams’ final meeting of the season.