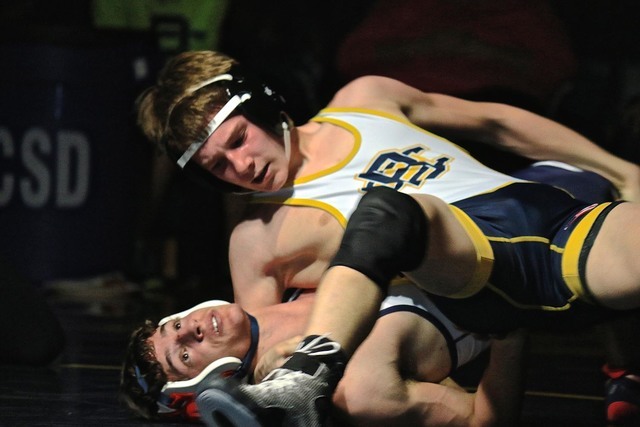 D.J. Reese, who will be a junior this fall at Boulder City High School, has spent much of the summer working on his wrestling skills with the hopes of becoming a state champion. Laura Hubel/Boulder City Review

Before Boulder City High School junior D.J. Reese attempts to hurl curveballs for the Eagles as a starter next spring, the two-year varsity wrestling veteran will attempt to achieve a bigger prize.

Having already won a state championship ring this past spring with the baseball program as a reserve, Reese has split his focus this summer between his two beloved sports, hoping for a repeat as Division I-A state champions next season on the baseball diamond, as well as becoming an individual champion on the wrestling mat in the 106-pound weight class.

I love having a state championship ring, but I also want to leave my name up on the wall once I leave Boulder City, Reese said referring to the Eagles wrestling program in which state champions get their name and weight class posted in the teams practice facility.

In hopes of achieving that goal, Reese, who has been a prominent figure in the 106-113 weight class the past two seasons in the Division I-A ranks, stepped out of his comfort zone this summer, traveling to Reno on June 23-25 with La Costa Canyon High School in California for the Spanish Springs High School Dual Summer Tournament, where he met a handful of the states top competitors.

Im very grateful for the wonderful coaching staff over at La Costa for taking D.J. under their wing and letting him compete, Boulder City wrestling coach Jim Cox said. Theyve been one of our sister programs for a while now, and this gave D.J. a great opportunity to get ready for the winter.

The Dual Summer Tournament really helped me realize that I can compete with anyone in our league, and it really is anyones game, Reese said. If I keep working hard, I can be a state placer in the next two years, maybe even a state champion.

Using the tools he learned from his camp experience in mid-June with his Eagles teammates at La Costa Canyon, Reese said that his improved technique and point of attack he learned from National Wrestling Hall of Famer Joe Gonzales was crucial in his recent success.

There were a lot of great coaches at the La Costa camp, but Joe helped me the most during my experience, Reese said. He really helped me with my footwork, which made it easier for me to take down my opponents.

Following a dominant sophomore season that saw him have to pull out of regional competition because of a broken hand, Reese looks ever more determined to make the type of tournament appearance that has eluded him the past two seasons.

My goal is to make a state tournament appearance and at least place, Reese said. Im going to continue to work out in the weight room with my trainer to quicken my feet and find as many matches as I can in the summer and fall to accomplish that. The work never stops. After experiencing new personal highs on the mat and reworking his technique, Reese figures to be among the top wrestlers in his weight class this coming season. Finally healthy and ready to be a force again, Reese has already left a lasting impression on his coaching staff.

D.J. is a kid thats been close before, Cox said. He was really rolling toward the end of last season, before the injury bug bit him. Im glad to see its only motivated him though to work harder and get better. He has a chance to be special; we believe he has the tools to be a champion if he continues to push for it.