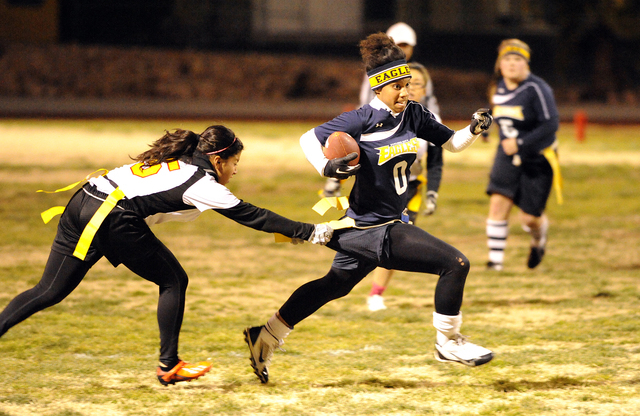 “Thomas was awesome; he’s our wrestler of the week,” Team Boulder head coach Jim Cox said. “It was a tough competition and several of the wrestlers got valuable experience.”

Team Boulder finished in 20th place among 50 teams in the Asics competition. The Eagles, which are 9-1 in dual meets, have a doubleheader today at Chaparral where they wrestle Virgin Valley at 6 p.m. and host Chaparral at 7 p.m.

Junior guard Katlyn Daly added 8 points for Boulder City, which held the Pirates scoreless in the second quarter and led 21-5 at halftime.

“We played well on the defense end and caused the 25-plus turnovers,” Lady Eagles coach Paul Dosch said. “It was a good win to start league play. But we still have to work hard.”

Marcus Walker led Boulder City with 10 points, but the Eagles could not rally to win their Sunrise League opener Monday against Moapa Valley in Overton.

The Eagles’ record dropped to 4-8 overall and 0-1 in league play with the 50-31 loss against the Pirates. Jacorey Dixon scored 5 points, while Xavier Steel, Tyler Newby and Zack Murphy each scored 4 points.

Moapa Valley jumped to a 32-16 advantage at halftime.

The boys team defeated Desert Oasis 9-0 Monday at Boulder Bowl to improve to 6-1 and remain in first place in the Southeast League. Randall Berkheimer had the high game of 225 and Teagan Smale had the high series of 601 as the Eagles outrolled Desert Oasis 2,160 pins to 1,310.

The girls team defeated Desert Oasis 9-0 Monday to improve to 3-4 in the Southeast League. Niki Schulz had the high game of 175 and high series of 475 as the Lady Eagles outrolled Desert Oasis 1,478 pins to 1,018.

The boys and girls both bowl against Sunrise Mountain at 3:30 p.m. today at Sam’s Town.

Boulder City defeated Tech Monday to improve to 8-0 overall and 6-0 in the Southeast League. The Lady Eagles play at 5 p.m. Friday at Liberty.