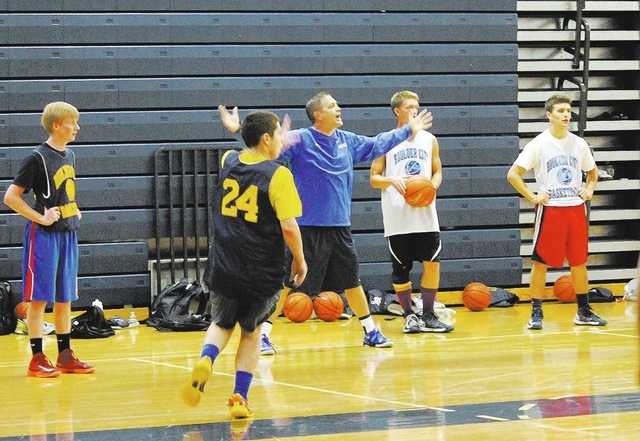 It’s early in the season but already Tyler Newby and Marcus Walker have shown they will be two of Boulder City’s leading scorers. Xavier Steel showed signs of dominating the boards for rebounds and Lane Worrall’s game energy gave opponents fits.

The four athletes led the way as the Eagles finished in third place in the Holiday Basketball Classic at Lake Mead. They won three of five games in the three-day event.

Newby and Steel were named to the All-Tournament first team. Walker and Worrall were considered standouts.

“Tyler and Marcus did real well on the offense and Xavier and Lane had so much energy at both ends of the court that their presence made things happen for others,” head coach John Balistere said. “We played better as a team in each of our games, but we let one get away against The Meadows because of poor free-throw shooting.

“It is early and everyone is still learning. But I am happy for where we are after only five games.”

The Eagles (3-2) play their first home game at 7:30 p.m. Friday against Southern Region rival Faith Lutheran (2-3). The Eagles have defeated the Crusaders each of the past two seasons on the road.

“Faith Lutheran will be a good test for us,” Balistere said. “They are always an excellent program.”

On Saturday, Boulder City jumped to a 22-17 halftime lead but could not hang on in a 54-51 loss to The Meadows.

But in the third-place game Saturday night, Boulder City played West Wendover for a second time in the tournament. The Eagles prevailed 60-55 to avenge a loss earlier in the tournament. Newby had 10 of his 17 points in the second half as the Eagles rallied from a 29-25 halftime deficit to beat the Wolverines.

Walker added 10 points for the Eagles, which outscored the Wolverines 20-13 in the third quarter.

In the opening round matchup against West Wendover, Newby scored 15 points and Jacorey Dixon added 6, but the Eagles lost 38-27 on Dec. 5. The Eagles bounced back later that day in their second game to beat Australia One 39-34. Newby led all scorers with 14 points. Walker added 7 points.

“Tyler kind of makes us go,” Balistere said. “He’s a great basketball player and we run a lot of our sets through him. He does so many things for us with and without the ball.”

Zach Murphy scored all nine of his points in the first half for the Eagles, which had 10 players score. Marcus Walker, Nicholas Walker, Worrall and Dixon each scored 6 points.

“We are learning a little bit more about what our identity is with this group this year,” Balistere said. “It’s a work in progress. I’m happy with most of our play in the tournament, but we still have a lot of work ahead of us.”