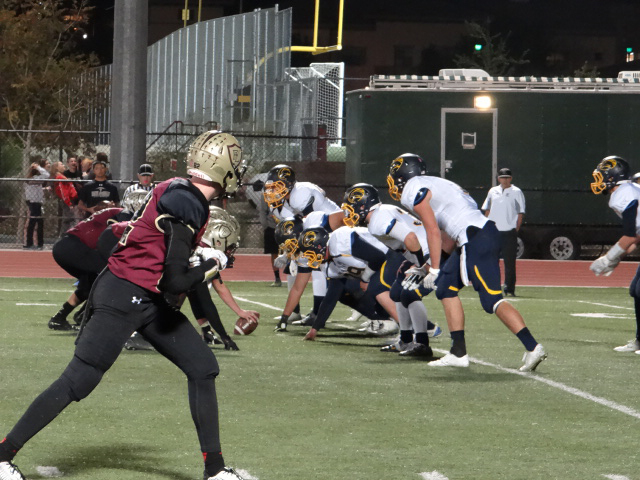 Boulder City fought hard for three quarters in search of an upset in the opening round of the Southern Region football playoffs Oct. 30, but the game got away from the Eagles in the final quarter and they were eliminated by Faith Lutheran 40-11.

Boulder City ended its season with a 4-6 record. The Eagles reached the playoffs for the third consecutive year and were the No. 4 seed from the Sunrise League.

Faith Lutheran (7-3), the defending state champion, advanced to the second round Friday night to play at home against Desert Pines (9-1).

It was 17-3 at the end of the third quarter and Boulder City was driving on offense and appeared headed to cutting its deficit. The Eagles fumbled and appeared to recover the ball. They even emerged from the pile of players with possession of the ball. But the referee signaled the ball belonged to Faith Lutheran, and the game would never be the same.

Three plays later, Faith Lutheran scored and instead of a possible 17-10 lead, the Crusaders moved ahead 24-3.

Boulder City committed several turnovers and miscues inside its own 20-yard line on its next three possessions and the score soared to 40-3 within minutes.

“We had our chance against Faith Lutheran but kept shooting ourselves in the foot and they took advantage of our mistakes,” senior Trenton Carmell said. “It was a really fun year. It really stinks that it is over.”

The Eagles started well and forced two turnovers in the opening quarter, one of them a 62-yard interception return by Carmell.

The Eagles’ offense could not convert the Crusaders’ turnovers into touchdowns, but they got a Patrick Hood 23-yard field goal to make it 3-0 with 2:53 remaining in the opening period.

But then came the mistakes. Two Eagles’ turnovers gave the Crusaders a short field twice in the second quarter and they capitalized for a 14-3 lead at halftime.

Eagles head coach Alex Kazel changed his offensive lineup hoping to confuse Faith Lutheran, and it worked in part until the turnovers. The Crusaders led only 17-3 at the end of the third quarter and Boulder City’s defense was being physical and controlling the game despite the deficit.

Junior Austin Wishard started at quarterback in place of Carmell, who was the quarterback all season. Wishard finished 8-of-19 passing for 100 yards.

“We played a tough season with lots of injuries from the first game,” senior Justin Rockenfeller said. “It’s not that we were a bad team, we just failed to find our chemistry together as the season progressed. But we had a lot of guys who worked hard every week.”

On the Eagles’ final possession Kazel returned his lineup to his seniors and Carmell led a 67-yard drive down field and it was capped off by 1-yard touchdown run by senior Brooks Roe.

“It was a great season overall,” senior linebacker Jacob Jurgschat said. “Besides our record, everything else was great. Faith Lutheran was just a very good team that exploited our weakness late in the third and fourth quarters.

“We did a real good job to make”