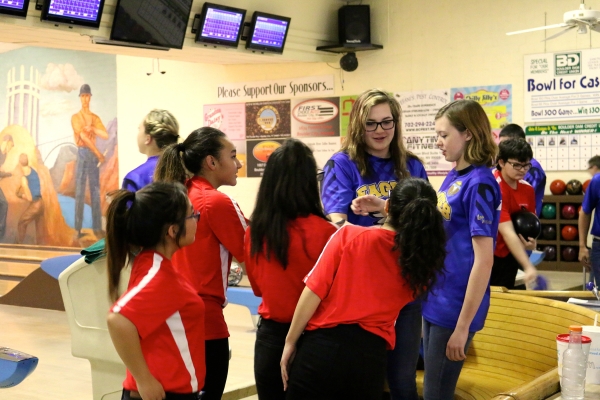 Both Boulder City High School bowling programs learned a valuable lesson last week during their matchups with Southeast Career Technical Academy, needing to be able to stay consistent throughout the match and capitalize on pins when they’re there.

In an uncharacteristic loss for the boys, the Eagles really missed the dead-eye accuracy of senior leader Teagan Smale, who missed his second consecutive game because of a tryout with Team USA.

Falling behind to the Roadrunners 2,084-1,899 Jan. 6, the duo of junior Conner Armstrong and freshman Sam Holt were dependable at times for the Eagles in the learning experience, but unfortunately weren’t enough to compensate for the loss of the conference’s top bowler.

Armstrong finished with an overall score of 251, bowling a 122 in his first match and a 129 in his third and final match, while Holt made an appearance in the Eagles’ second match, providing Boulder City with a score of 124.

Continuing to carry the load for the Eagles in light of Smale’s absence was junior Ed Rassuchine, who finished second among individual bowlers with a score of 523.

Lending Rassuchine a helping hand offensively despite the losing effort was junior Samu Jancuk and senior Dylan Amico, who provided the Eagles with individual scores of 507 and 494, respectively.

Jancuk, led all Eagle bowlers with the highest match score, bowling a 182 in his first match.

For the girls, the Jan. 6 matchup against the Roadrunners at times showed how far they’ve come as a program with championship aspirations, yet just how far they need to go in order to reach the defending state champions.

Falling to Southeast Career Technical Academy 1,818-1,509, the Lady Eagles merely couldn’t buy a pin at the local Boulder Bowl, with a majority of the girls bowling below their season averages.

Junior Abigail Harling led the Lady Eagles’ charge with a team-high score of 385, finishing with 136 in her final two matches each after struggling to put up a first match score of 113.

Sophomore Bailey Bennett-Jordan and senior Emily Owens both shot 377 for the Lady Eagles, in contrasting performances.

Junior Alexis Cable would sum up the Lady Eagles’ efforts against the Roadrunners, bowling a 370, including a 149 in her second match, which was the team’s top individual game score.

It was a week of misery for the Boulder City High girls basketball program, falling in a pair of conference games and dropping to fourth place in the Division I-A Sunrise standings. But with a week off to regroup, the Lady Eagles are starting to put things into perspective.

“We lost a pair of tough games this past week, so this break couldn’t have come at a better time,” head coach Paul Dosch said. “It’s tough when you’re competing a few times a week, each week because your practice schedule suffers. I’ve said all season long that this is a relatively new group and one that will take time to gel together. We’ve shown promise throughout different points this season, now it’s time to continue the effort.”

Starting the week off with a 42-17 loss on Jan. 6 to current fifth-seeded Moapa Valley in their annual rivalry game, the Lady Eagles were completely caught off guard by the Pirates’ offensive attack.

Sticking close with Moapa Valley 10-5 after the first quarter, the Pirates used a 15-4 second quarter run to take the game entirely.

Senior guard Megan Morton scored 15 points for the Lady Eagles in the losing effort, but would only get two points of support from her supporting cast throughout the night.

Senior guard Lauren Mullins was the Lady Eagles only other contributor.

“Those type of things can’t happen if we want to be successful in our league,” Dosch said. “Megan’s doing everything she can for us; she’s in full attack mode. As a team, we need to do a better job surrounding her with support in order to get into the win column.”

The Lady Eagles would go on to lose again the following night, Jan. 7, on the road to second-seeded Desert Pines, but show the type of effort Dosch was looking for in his girls during the narrow 41-35 defeat.

“We lost the game, which is never something to be proud of, but there’s positives we can take from that night and work with,” Dosch added. “The effort level alone was a major improvement and it showed in the final outcome. Desert Pines is a good team, one we knew we were going to have to compete with coming into the season. We showed we belong out there on the court with them; now next time we just have to close.”

In a dominating effort, Morton led all scorers again with 29 points in perhaps her best performance of the season. Among the leading guards in the state, the Lady Eagles certainly have a super star to contend for a championship with, if they can get contributions from the majority of the starters moving forward.

Getting back to their schedule Friday with a home game against top-seeded Chaparral and then third-seeded Virgin Valley on Tuesday, Dosch is hopeful the team’s extra practice time helps out in the must-win situations.

“Both of these games are going to be really tough,” Dosch concluded. “We’ve been practicing all week, trying to get back to basics, giving the girls new schemes and concepts, trying to do anything we can to compete in this league. This conference is no easy task. Anyone can knock you off if you’re not prepared. We’re making sure that’s not the case.”

Moving into the heart of the conference schedule, the Lady Eagles have nine games remaining, with Moapa Valley looming just behind them for the fourth and final spot in the Sunrise. If the Lady Eagles are hoping to stay afloat in the conference playoff race, they’ll need at least a split in their next two games.