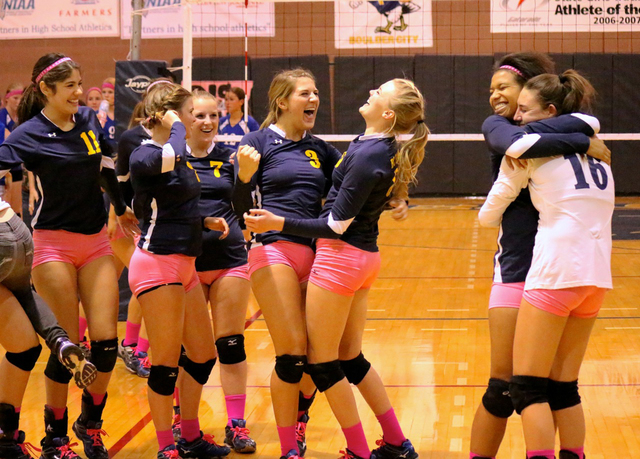 Boulder City can earn a return trip to the Division I-A girls volleyball state tournament today with a victory against Sierra Vista at Sunrise Mountain.

The Lady Eagles, 24-8 overall and the Sunrise Region’s No. 1 seed, advanced to the semifinal today with its 25-21, 25-22, 25-22 victory Tuesday against Pahrump Valley in the opening round of the Southern Region girls volleyball tournament.

By winning today, the Lady Eagles are assured of a berth in Friday’s Southern Region final where both the champion and runner-up advance to the state tournament Nov. 14-15 at Galena High School in Reno.

Lauren Pocius had 14 kills and five aces to lead the Lady Eagles to the sweep of Pahrump Valley. Freshman Maggie Roe recorded 10 kills and two blocks, and Alyssa Ybarra added 38 digs. The Trojans ended the season 15-18.

Last year, Boulder City reached the region final where it lost to Faith Lutheran, but advanced to state. There, the Lady Eagles lost to Dayton.

“We are ready to step up and win,” hitter Kinsey Smyth said. “We can make it to state with one big win against Sierra Vista. Tonight is the most important because it means a chance to play at state in Reno or the end of the season.

“But we also have plans to play well Friday and hopefully win the region championship. Beating Sierra Vista allows us at least two more games and we are not ready to quit yet. I can’t wait to put everything we learned this season onto the court for our matches tonight and Friday. This is a special team and we can do it.”

Sierra Vista will prove to be a larger and faster opponent than Boulder City is accustomed to playing in the region tournament in past seasons. The Mountain Lions were one of two schools in Southern Nevada to drop from Division I because their overall sports program struggled to compete in the state’s largest division. But their volleyball team was one of their better programs.

The NIAA evaluates schools every two years and schools can move up or down between Division I or I-A depending on their overall sports program’s results. Sierra Vista dropped this fall into the Sunset League, while Del Sol dropped into the Sunrise League with Boulder City.

“We expect Sierra Vista to be a very tough opponent for us,” Boulder City coach Cherise Hinman said. “They are a good team and we had to work hard and prepare for the match.”

The Boulder City-Sierra Vista match will depend largely on who controls the net: the Lady Eagles with Roe, Pocius and Smyth or the Mountain Lions with Bergquist and Land.