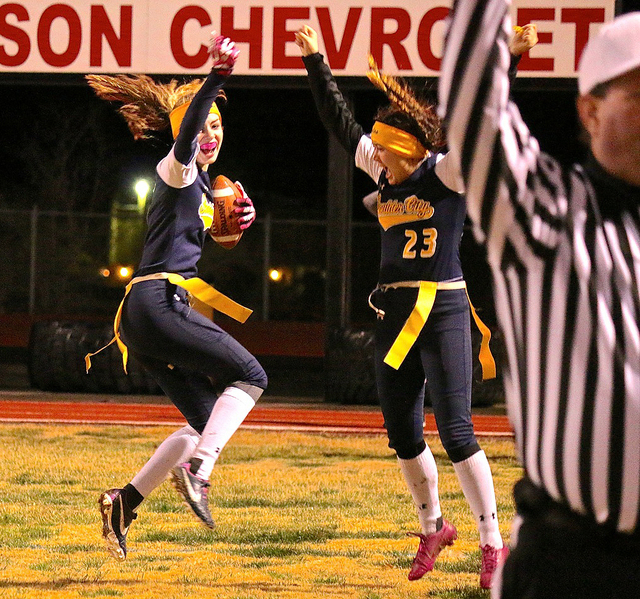 The way Boulder City flag football coach Chris Morelli sees it, they are all too important to lose any one game.

“These final two regular season games are too important to lose because they could hurt our seeding in the playoffs and cause us to lose momentum,” Morelli said. “We are in a must-win mode, and the girls know what is at stake. They have responded all year, and I expect them to do what is needed.”

The Lady Eagles play their toughest opponent of the season and biggest rival, Foothill, tonight at home on senior night. The winner could be the league’s No. 1 seed. The Eagles then finish the regular season Tuesday at Green Valley, their lone loss in more than two seasons of play.

Boulder City was ranked No. 2 in Clark County in Sunday’s latest Las Vegas Review-Journal poll of Southern Nevada coaches. Foothill is ranked No. 4 and Green Valley, a former No. 3, has fallen to No. 7, mostly because of losses to Boulder City and Foothill.

“We know this is it, our final week of the regular season and a start to the playoffs,” quarterback Jeanne Carmell said. “We are focused on winning because there’s no time to slip up now. We are determined to reach our goals.”

Morelli is more concerned with the playoff seeding and a return to the Sunrise Region championship where his team was eliminated a year ago in an 18-13 loss to Green Valley — one game short of the Southern Nevada championship final.

The Lady Eagles defeated Basic 18-7 at home Tuesday to raise their record this season to 16-0 and Sunrise League record to 14-0.

At Rancho, Kinsey Smyth caught a touchdown pass and ran for another to lead the Lady Eagles. She caught five passes for 85 yards and ran for 24 yards on three carries. Carmell threw two scoring passes, one to Smyth and the other to Makenzy Waldo.

Boulder City beat Eldorado at home as Carmell threw two touchdown passes and ran for one. She completed 16 of 23 passes for 207 yards, and had touchdown strikes to Smyth and Waldo. Carmell also ran for 90 yards on nine carries. Smyth ran for one score, while Kenadee Bailey returned an interception for a touchdown.