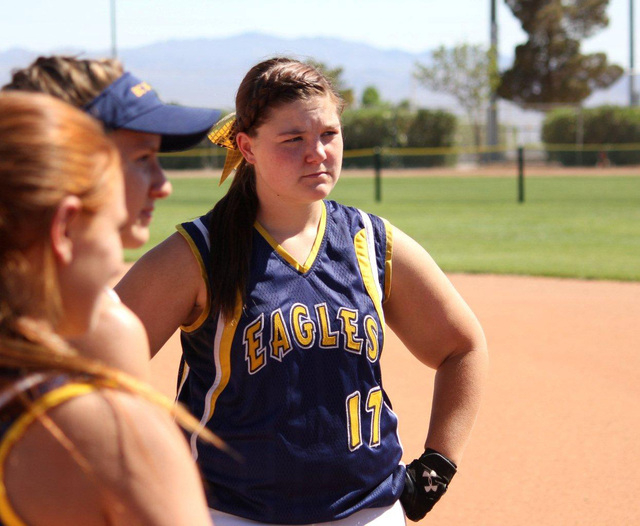 While first­-year Boulder City softball coach Angelica Moorhead was not happy her team lost the Southern Region championship Saturday, she was all smiles that her team earned a trip to the state’s Final Four tournament.

The Lady Eagles lost 6-­4 Saturday to Pahrump Valley in the Southern Region final, but the silver lining was that the region champion and region runner-­up both advance.

“We would have preferred to advance as the region champion and with more momentum, but the girls were playing to advance to state and they did,” Moorhead said.

“We are so excited to be traveling up to Reno. We wanted to win the region title, but we didn’t get it done. But that’s last week. We have another chance this weekend to come out on top and bring home the really important hardware.”

Boulder City also will play Friday, at either 12:30 p.m. or 2:30 p.m. in the second round, which also is scheduled to be played at Bishop Manogue before moving Saturday for one or two championship-­round games at Hixson Park on the campus of the University of Nevada, ­Reno.

The Lady Eagles will rely on the pitching of sophomore Charlie Masterson and junior Mickaela Brown.

“Three for three, I would have never thought it,” Ybarra said. “The only thing better would be to win this third attempt. Being a three­-sport athlete isn’t easy. It means year-­round practices and games. It is demanding, but reaching three state tournaments makes all the hard work worth it.

“Losing early in the semifinals in volleyball was heart­breaking. Getting so close to the championship in basketball was amazing, but the loss also hurt. I hope I get to experience the joy of winning the state title. But each trip has been worth it because of the teammates I shared the journey with.”

Boulder City managed to defeat Sunset League No. 1 seed Faith Lutheran 16-­11 Friday in a game that determined which team played Pahrump Valley in the region final, but more importantly assured the winner of the trip to the state tournament.

“It was a crucial game against Faith Lutheran on Friday, and the one we had to have,” Moorhead said. “Sure, we wanted to beat Pahrump Valley, but in beating Faith Lutheran we earned the trip to state that was our goal, and we have a clean slate at state.

“After our first game loss (May 15) to Pahrump, we knew we had to go back to Faith Lutheran and play them and beat them on their home field in order to qualify for state. To be honest, we didn’t even talk about the game and how important it was. I just wanted the girls to be loose and focused and be ready mentally. We came out hitting the ball like crazy and really having some fun and stayed focused. It was an exciting 16-­11 game.”

Boulder City and Pahrump Valley have split four games this season, and could play once or twice at state depending on results.

“We’ll be ready, no matter who we play,” Ybarra said.