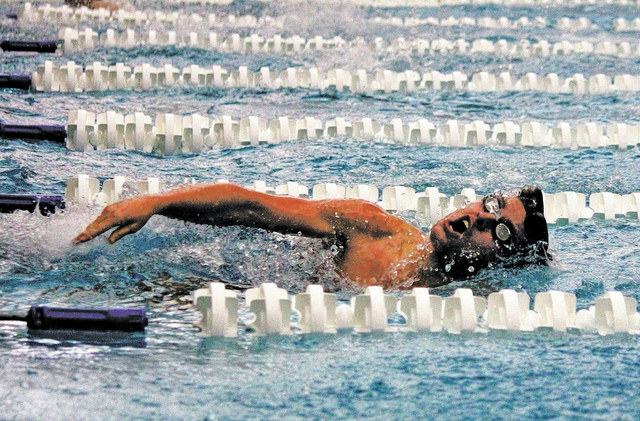 The Heatwave had 25 athletes compete in 121 individual events and 20 relays.

“Our intent in going to this meet was for our swimmers to get a chance to compete against pro athletes and national-­level high school swimmers in a different setting than we have been in before,” Heatwave head coach Mike Polk said. “It went about as well as we could have planned, with 18 of our 25 swimmers getting second swims in finals.”

The Heatwave finished second in the boys, girls and combined team competitions, finishing behind only the historically strong Mission Viejo Nadadores from California.

“It was a great effort by a lot of swimmers at the Chesapeake Elite Pro-Am,” Polk said. “The kids really enjoyed getting up and racing against some of the top pro swimmers in the country, and acquitted themselves very well.”

Adam Peterson stepped up, swimming out of Lane 8 in the 1,650-yard freestyle and dropped nearly 20 seconds off his qualifying time to move onto the awards podium with a third-­place finish and a time of 16 minutes, 1.90 seconds.

“Adam really surprised some people in that heat by jumping on them early in the race and never letting up,” Polk said. “It was a great swim for him.”

“Jared did well in his best two events,” Polk said. “Jared is preparing himself well for his jump to NCAA Division I swimming next season by challenging these pro-­level swimmers.”

Alex Hubel, a Boulder City High junior, did well in the 200 freestyle, swimming 1:50.86 for eighth place.

“It was probably her best ever strategically swam race and it put her in the championship final,” Polk said. “This was a real test swimming against elite national talent and Alex held up really well.”

Rachael Grothe had excelled in the 100 butterfly to put herself in the championship final. Grothe was able to run down swimmers at the end of her qualifying race, which featured a strong field. She swam 56.89 for eighth place in the final.

“Our biggest strength was probably our relays at this meet as we consistently put teams on the awards podium by finishing in the top three,” Polk said. “This was highlighted by the 800 freestyle relays in which we won the girls event and then put both our A and B boys teams on the podium in second and third places.”

The girls 800 freestyle relay team was seeded sixth, but outswam the competition to finish first.

“We were seeded sixth, but we took first place and we got to stand up on the podium for the first of what would be many successes that would come throughout the weekend,” Hubel said. “What a great feeling it was to be up there as a team. We had been working together toward this through in many practices and hours in the gym, and we made it.”