The Boulder City girls volleyball team remained unbeaten in the Sunrise League with key wins in the past week.

Boulder City also had a league match Wednesday at home against Del Sol, but the game was played too late to report the scores in this issue.

“We are doing very well for this part of the season, especially with our serving and defense,” head coach Cherise Hinman said. “Some of our strongest players have also developed into some of the strongest in the league such Alyssa Ybarra as the libero (defensive specialist) and both Jaden Wood and Lauren Pocius at the outside hitter position.

“Tara Cox is doing well at the setting position, and Alea Lehr is leading the team in service aces. Maggie Roe is the team’s leading blocker at the net. But really it is a whole team effort when they get out there on the floor.”

On Monday, the Lady Eagles are on the road in a league match at Desert Pines. They are home Tuesday against nonleague opponent Calvary Chapel and at home Wednesday against league opponent Tech, currently in third place. All three games start at 6 p.m.

“We want to keep winning to keep secure the No. 1 seed in the playoffs and to keep our momentum heading to the end of the regular season,” Ybarra said.

The boys and girls cross-country teams ran a meet Wednesday at Village Green Community Park, but it was too late for results to appear in this issue. Their next meet is at 8 a.m. Saturday in the Lake Mead Invitational at Veterans’ Memorial Park.

The Freshman/Sophomore Championships are at 3 p.m. Tuesday at Desert Breeze. Several of the underclassmen from Boulder City will compete.

They also had a match Tuesday in a seven-team league match. Lani Potter shot a 9-­over-­par 81 at Oasis Golf Course in Mesquite to win.

Tuesday’s and today’s rounds are the final tuneup matches before the Southern Region Golf Championships at 10 a.m. Tuesday at Boulder Creek Golf Course.

Alex Krausman scored for Boulder City in a 6-­1 boys soccer loss Tuesday to visiting Virgin Valley. In girls soccer Tuesday, Brooke Beckstrand and Lauren Mullins each scored a goal for the Lady Eagles in a 7-­2 loss at Virgin Valley. 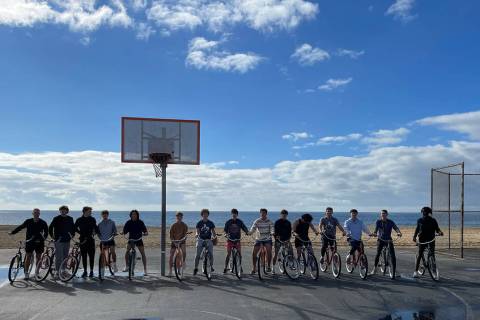