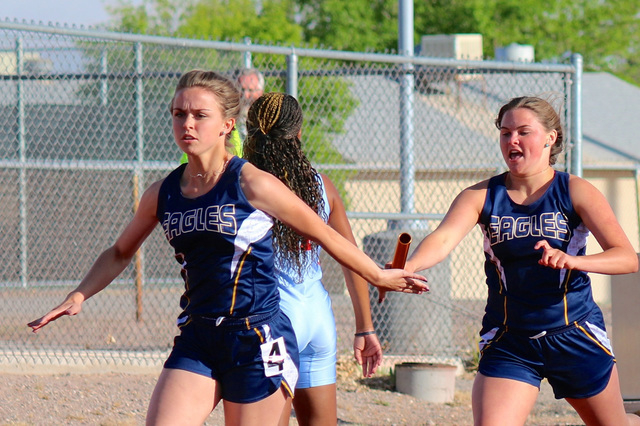 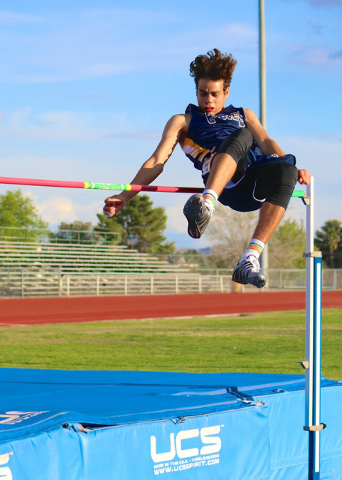 Boulder City High School’s boys and girls track and field programs performed well on March 30 at home against Laughlin, Pahrump Valley, Western and Word of Life, with the girls finishing in first place, while the boys finished in second place.

Sweeping their way through the competition, the Lady Eagles accumulated a team score of 175, beating out Division I-A opponents Pahrump Valley (97) and Western (33) handily.

In the 100-meter and 200-meter dashes, senior Paige Buettner took home first place in both events, with times of 13.26 and 27.61 seconds, respectively, while later finishing in 20th place on Saturday in the Division I-laden Ron Resler Invitational with a personal best of 13.13 seconds.

A key member of the Lady Eagles’ 4×100 and 4×200 relay teams, Buettner was also key in the teams’ first-place finishes March 30 during their league meet, along with senior Bayden Huxford, junior Kenadee Bailey and sophomore Maida Nelson.

The relay team of Buettner, Huxford, senior Lauren Mullins and junior Jordyn Trobiani was also impressive at the Ron Resler Invitational in the 4×200, placing eighth.

Huxford also placed first in the pole vault on March 30 with a leap of 7 feet, while finishing third in the 200-meter dash with a time of 29.53.

Rounding out the girls’ efforts on March 30, Trobiani placed first in the high jump and second in the triple jump with leaps 4-8 and 27-9, respectively, while Nelson placed second in the long jump with a leap of 13-4.

For the boys, the Eagles just finished behind Pahrump Valley (125½) with an overall team score of 107½.

Continuing to set the tone in the conference, senior Sam Gomez swept his way through the discus and shot put competition March 30 with throws of 172 feet and 51 feet. Gomez also put his talents up against the best throwers in the Division I ranks, finishing first in the discus competition with a throw of 172-11 and fourth in the shot put with a throw of 52-7.

Making his debut for the Eagles, junior Justus Green also had a solid outing March 30, finishing first in the high jump with a leap of 5-8 while placing sixth in the 100-meter dash and seven in the 200-meter dash with times of 12.55 and 25.83 seconds, respectively.

Setting their sights toward the state meet in May, the Eagles will continue their season next Wednesday in a nonconference meet against Sierra Vista, Virgin Valley and Spring Valley at Spring Valley.