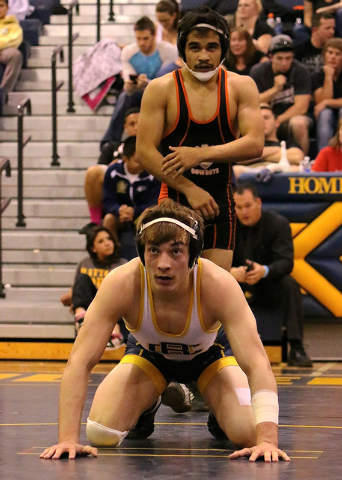 Senior Collin Fox won the individual championship at 126 pounds to lead Team Boulder to a third-place finish Saturday in the Division I-A Southern Region Wrestling Tournament at the high school.

Fox is one of five Eagles who advanced to the state tournament, which is scheduled for Friday and Saturday at the Winnemucca Events Center.

Pahrump Valley trailed Boulder City after the first day of competition but closed strong by winning three of the four heaviest weight classes Saturday to capture the championship with 239½ points. Virgin Valley was second with 195½ and Team Boulder was third with 158.

It is the second consecutive year that the three teams finished in that order in the regional tournament. There were 16 teams with 18 wrestlers in each of the 14 weight classes — 288 athletes in all. The top four finishers in each weight class advanced to the state tournament.

“Of course, we are very happy for Collin for winning his championship, but also for the four others that advanced to state and the five who worked hard to reach fifth place,” coach Jim Cox said. “The kids worked hard all year and we are proud of their efforts. Hopefully, we can get a few champions at state.”

Division I-A northern champion and state tournament host Lowry is the favorite to repeat. Lowry is seeking a seventh consecutive team state championship and its 17th overall, a state record.

Fox won the championship by default when his opponent, Miguel Guerra of Chaparral, was injured and could not complete the final match. Fox defeated Cash Crandall of Virgin Valley 7-5 in the semifinals.

Last season, Fox was Team Boulder’s top finisher, placing second, at the state tournament, but the opponent to whom he lost has moved to another weight class.

“I have a chance to get back to the final and make the best of it as a senior,” Fox said. “It doesn’t matter who you meet at state, they are all tough. They all got there for a reason. But it is my dream and my goal to go and win it.”

Fox is hoping to become Team Boulder’s first state champion since Brandon Foster won the state title at 195 pounds in 2013.

Fox was the only wrestler for Boulder City in Saturday’s finals, but another four advanced to the state tournament by finishing in the top four places in their respective weight class.

Sophomore Brady Branscum (113 pounds) won his third-place match with a 3-1 decision over Trenton May of Faith Lutheran.

Senior Patrick Garvin (152) placed fourth. He lost his semifinal 5-1 to Cheyenne’s Sterling Walker and then the third-place match 6-0 to Darrian Rodgers of Spring Valley.

Senior Nelson Van Diest (182) lost his semifinal to Jonathan Crow of Pahrump Valley and then lost the third-place match 5-4 to Mojave’s Tariq Banks.

Both Garvin and Van Diest were regional runners-up the previous year.

“We were hoping all three of us could win the region championships and go to state as a No. 1 seed, but it didn’t happen for me and Patrick. We are disappointed, but we plan to do better at the state tournament,” Van Diest said. “I don’t know what happened. I lost the semifinal and my head just wasn’t in it the rest of the way. I plan to be ready for state, though, and make up for it.”

Team Boulder had another five individuals finish in fifth place, just short of advancing to state, but each provided important team points for the Eagles in the regional scoring.