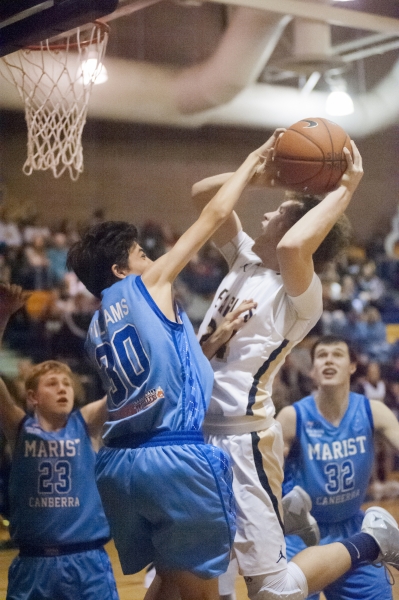 It’s the first week of January, just about a month into the boys’ high school basketball season, and the gym at Boulder City High School has yet to see a game be played on its floor. Thirteen times the Eagles’ boys basketball team has played, and 13 times it has been on an opponent’s hardwood.

What was different about the game Tuesday night against the Aussie Basketball Travellers was that it was their first home game all season. It was the first game where the Eagles had the home-court advantage and didn’t have to worry about an opposing crowd booing them.

Not only that, but the Travellers did what they do best, and made the voyage all the way from Canberra, Australia. Talk about an away game.

As fans started flooding into the game Tuesday night, the home side of the gymnasium looked as though it was ready to explode with hysteria as spectators finally were able to see a glimpse of their hometown team.

From the moment the ball tipped off, it was evident the Eagles were putting into place what Coach John Balistere drilled into their head at practice: Execute sound defense and fundamental offense.

Tenacious defense began to create fast-break opportunities for the Eagles early. Forward Justus Green, 6 foot 3 inches, came up with a few early steals that turned into a couple of easy buckets, and had Boulder City up 9-0 halfway through the first quarter.

The athletic transfer from Cimarron-Memorial High School showed just how big of an impact he can have on the game when he gets going. After one of his steals, Green took it down the court with a head of steam and cocked back for a one-handed slam. The ball ended up hitting the back of the rim and bounced out. Yet, his display of athleticism on a team that desperately needs it, was enough to get the Boulder City faithful excited about their side.

After that point of the game, the Aussies took the lead and never gave it back. The Travellers tore through the defense of the Eagles like a grey nurse shark ripping through its prey, culminating in an onslaught of three consecutive three-pointers heading into the second quarter. That left the Eagles on the wrong side of a 22-0 run by the Travellers.

During halftime coach Balistere had a message for his team that helped change the momentum, and get the crowd back into the game.

“We talked about how our efforts (were) not going to win many games, especially in our league, the way we played that first half,” explains Balistere about his team’s collapse on both ends of the floor the first half. “We were having too many breakdowns and too many uncontested shots.”

Heading into the fourth quarter the Eagles were down 41-31. With three minutes left to play, Carson Balistere took a charge to give possession back to Boulder City.

“I thought that was big. I thought we had some opportunities to step up and take some other charges, but that was a big defensive play for us,” said coach Balistere.

The next play down sophomore point guard Tanner Montgomery had a beautifully executed backdoor pass to the hard-nosed Austin Wishard for the easy two.

Though the Eagles cut the Aussies lead down to three points, they could not overcome the deficit and fell short 49-44 to the Travellers.

After the game, the spectators in the Boulder City High School gym got to witness just how basketball unites different walks of life from all over the world. After a week of hosting the Australian team, both squads huddled up together behind an Australian flag to take a picture. It was a moment that will forever be ingrained for players on both teams.

The Boulder City boys basketball team played in California over winter break in the Paloma Valley Winter Shootout. The Eagles went 1-4 with Austin Wishard being named to the All-Tournament Team for his outstanding play.

Wishard said he prides himself on the defensive end and taking charges when his team needs a defensive stop. He currently leads the team with 19 charges taken, and is aiming to break the school record of 43.