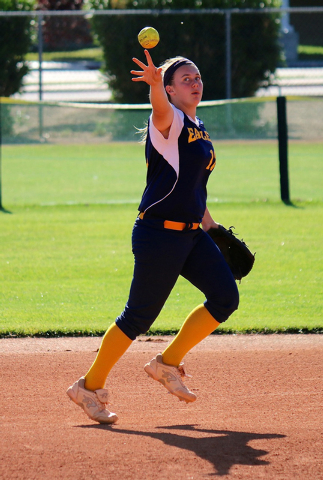 A late game rally pushed the Wildcats to a 6-5 victory against the Lady Eagles softball team Friday night.

“We have to protect our pitcher, and help her,” head coach Angelica Moorhead said. “She’s working her butt off, and we have to have defense for her. And that’s what hurt us, were errors. Errors always come back and beat us, and dead bats. Every once in a while when we have a string of hits and then all of sudden we can’t hit, or we’re hitting right to them. We just need to fine tune, work on errors and take things more serious.”

For a majority of the night, the Lady Eagles lead Las Vegas High, until the Wildcats brought in three runs in the last inning that Boulder City just couldn’t recover from.

“It’s frustrating at the end, but we did it to ourselves,” senior Alyssa Ybarra said. “It wasn’t necessarily that Vegas beat us, but we kind of beat ourselves. We made errors that were crucial at the end. It’s all right though. We’ll learn for it, and hopefully we’ll get it to zero next time.”

After pitching all five innings, Jordan Moorhead was given the win. She had nine strikeouts.

Wednesday they played Sunrise Mountain, but results were too late for this edition.

Friday and Saturday games conclude a busy week for the team. First up is Del Sol, then they have a long trip to Pahrump for a 10 a.m. Saturday game.