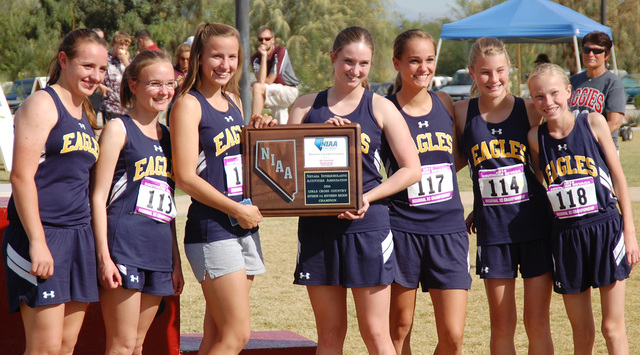 The Boulder City girls’ cross-country team not only finished the regular season undefeated, but it also won the Southern Region championship Oct. 30 and advanced all seven runners to the state finals this Saturday.

“The girls did it,” Boulder City coach Canaan Petersen said. “The team had strong performances from several runners and I am really proud of what they were able to accomplish. After finishing the regular season with a perfect league record, and doing well in all of the tournaments they ran, we knew it would come down to one race in order to win the region championship. They did great. They did it.”

“I wanted to stay as close to Jessica as I could because we knew that we had to have a fast start,” Selinger said. “We knew the start had a turn in it. So, if we didn’t start off fast enough we would get stuck in a big clump of girls. At state, I want to run alongside Jessica and the other leaders. I want to be near the top and want to have a faster sprint to the finish. The team did great. We can do well at state, too.”

“Jessica has been gearing up for this race since the season started,” Petersen said. “She knew she was a top returner and she did well in all of the meets she entered this season. She strategized about the entire race before hand and she executed her plan exactly except she was not able to beat her main rival in the last 200 meters.”

Embro ran within an arm’s reach for 3 miles, and when it came down to the sprint, she was edged by two seconds by Del Sol’s Ingrid Zarate.

“Sierra ran well all season and she definitely caught the eye of our competitors in the region,” Petersen said. “She ran a great race as well and finished in a solid third place.”

The Torgeson sisters, junior Emma and freshman Camille were critical in the success of the team. While neither earned a medal (only the top seven finishers do) Camille finished eighth in 22:19.6 and Emma was 13th (23:09.2), giving the Lady Eagles four finishers in the top 15 runners.

“With the first four scores and the fifth runner, we had the team title,” Petersen said. “But I cannot stress enough how important these two girls are. Emma battled injury in the latter part of the season so her coming out and running like this is just awesome. As a freshman, Camille has been running well all year, but her performance in the region proved she could run with some of the best runners in the region.”

Tyler Campbell was the lone Eagles runner to advance to the state event. He did so by cutting off 26 seconds from his personal best time to finish in 17:54.3 over the 3.1-mile course and placed 12th in the boys region race. Joren Selinger ran 18:37.5 and was 21st.

The Eagles finished fifth as a team with 188 points, behind champion Faith Lutheran’s 47 points.

“I tried to think of it as just another race, but I was definitely pretty nervous,” Campbell said. “I prepared myself by knowing my opponents and knowing the people I needed to keep up with. I also knew that I had to push myself harder than ever in order to do the best I could.”

After the top three teams and all of their athletes are advanced to state, they are removed from the results and the first five individual boys and girls not on those teams earn a trip to the state finals. Campbell was the fourth individual to qualify.

“I am really proud of his accomplishment,” Petersen said. “He has run well all year and to see him cut 26 seconds from his previous best while in a region race is impressive.”