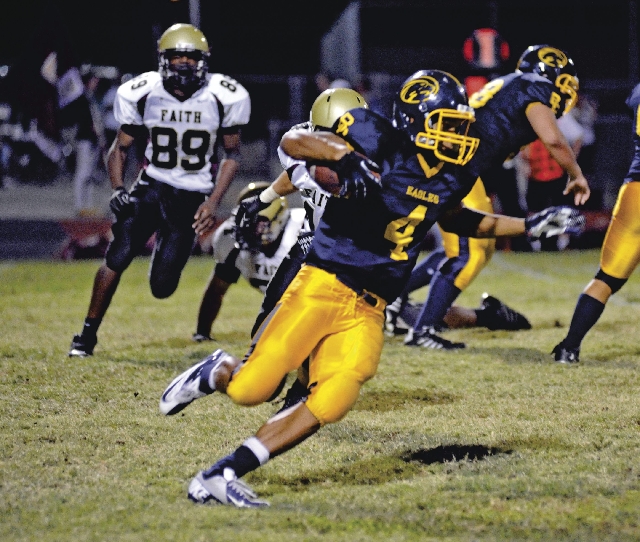 The Eagles had a 9-2 record overall, 4-1 in the Sunrise League, and reached the state 1-A quarterfinals where they lost to Cheyenne, 30-23, on Nov. 2. It was the Eagles first playoff berth since 2009.

If the Eagles are to repeat the success of a year ago, they must handle the 2013 schedule, which has five of its nine games on the road.

The Eagles will play their first four games against 1-A opponents from the Sunset League, teams they could meet in the first round of the state playoffs.

The season begins Aug. 30 on the road at Mojave at 7 p.m. The Rattlers (6-5) lost to Moapa Valley in the state quarterfinals last year. Mojave should return quarterback Zach Arave and running back Ty Flanagan, both juniors who made second-team, all-state last year.

The defense should be led by second-team, all-state performer Lorenzo Guerro, a senior lineman.

The Eagles edged out a 16-13 home win against Mojave to open last season.

Boulder City will next travel to Western on Sept. 7. The Warriors finished last season 1-8, the only win coming by forfeit. Western should be led by senior Qwayjon Walker who made second-team, all-Sunset League team as linebacker and punter.

The Warriors are the only team on this season’s schedule Boulder City didn’t play last year.

Local fans will get their first look at the Eagles Sept. 12 against Pahrump Valley. The Trojans made the playoffs despite a 2-8 record last year, but got rolled by Moapa Valley 65-0.

Pahrump should be led on defense by senior linebacker Devontae Brown and senior punter Chad Uyeno, both of whom were second-team, all-Southern region selections.

The Eagles downed the Trojans on the road last season 33-6.

Boulder City goes back on the road to Faith Lutheran on Sept. 20, a team they beat twice in 2012. The Eagles beat the Crusaders 41-22 at home the second game of the season, then crushed them at home again 57-33 to open the playoffs.

The Sunrise League games begin Sept. 27 at home against Desert Pines. Boulder City won at the Jaguars (5-5), 25-16. Desert Pines lost in the opening round of the playoffs to Mojave.

The Jaguars should be led by senior running back and kick returner Malik Davis, who grabbed second-team, all-state honors last year.

The Bulldogs (5-5) lost in the opening round of the playoffs. The team should be led by senior linebacker Dee Bowler and senior punter Garrett Leavitt, both of whom were first-team, all-region. Leavitt was also second-team, all region at quarterback.

On Oct. 11, the Eagles travel to Overton to face four-time state runner-up Moapa Valley. The Pirates handed the Eagles their only regular-season loss last year, 45-6, in Boulder City.

Moapa Valley, who has made the state title game seven straight years, has not lost to the Eagles since 2005.

After facing the meat of the league schedule, Boulder City finishes the season with the two league opponents that didn’t make the playoffs last season.

Senior running back Sherman Nash should be back after grabbing second-team, all-region honors last year.

Should the Eagles finish in the top four of the Sunrise League, they will be in a playoff game Nov. 1.

However, Steel, who finished with second-team, all-region honors should be back. As will be seniors Dillon Prach and J.D. Owens, both of whom received second-team, all-league honors on defense in 2012.

Thomas Prach is expected to be the quarterback replacing the graduated Joe Miller. The top receivers are expected to be Sam Woodbury and Jacorey Dixon.

Coach Alex Kazel, who is entering his sixth season, did not return calls for comment by press time.