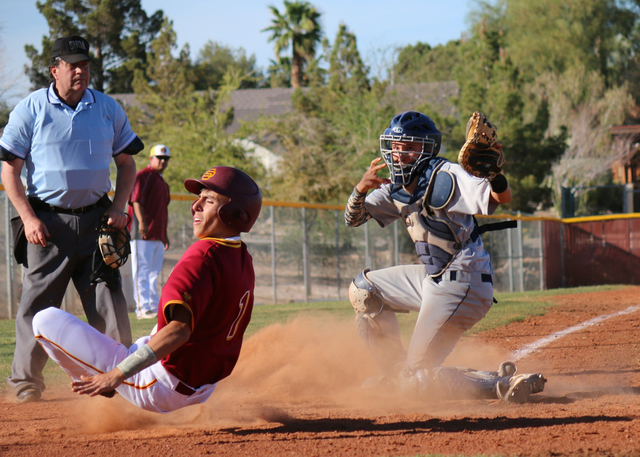 In the Del Sol game, both teams scored early. Boulder City pulled in two runs in the top of the first, including a home run from pitcher Koopman. The Dragons brought in four.

The game remained quiet until Boulder City erupted for a six-run sixth-inning rally to gain an 8-4 lead over Del Sol.

But the Eagles were just getting started. They put up nine more runs in the seventh to put the game away and claim their fifth consecutive win, putting their record at 7-3 for the season.

“The way it worked out is better for us, because we showed the character that we are going to need,” head coach Bobby Reese said. “Things weren’t going our way but we didn’t give up. We just kept fighting, having good at bats, and kept trying to adjust at the plate.”

With high postseason aspirations, Boulder City, which is 4-0 in league play, is focusing on one game at a time.

Boulder City has won seven of its last eight games, including Wednesday’s home game against Sunrise Mountain. It was another five-inning game for the Eagles, who won 10-0 with a no-hitter. VanDiest pitched the first four innings; Hubel finished in relief.

Up next for Boulder City is a road game against Southwest Career and Technical Academy at 2:30 p.m. today.

The Eagles face Eldorado on Friday before heading to Anaheim, Calif., for the Anaheim Tournament on March 28-31.