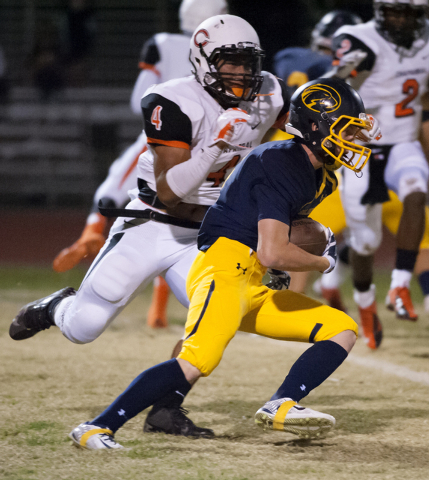 The bad news is that Boulder City lost 68-21 in its homecoming football game last Friday, a crucial Sunrise League matchup against Chaparral.

The good news is that with two league games remaining on the schedule, the Eagles control their own destiny and still can make the playoffs for a third consecutive year.

“At this point, every game we play is pretty much a playoff game,” senior linebacker Jacob Jurgschat said. “We were disappointed to lose our homecoming game but also to lose the league game.

“But we still can play hard and make the playoffs. The goal is to play each of the final two games hard and see what we have to do to ensure that we are playing in the playoffs. Then it is a new season, and anything can happen. We have played some very good teams close this year, and we aren’t giving up.”

What was supposed to be a festive evening quickly turned sour as Chaparral jumped on the Eagles for 14 points in the game’s first five minutes and led 41-14 at halftime.

The Eagles struggled to contain the speed of Cowboys running back Casey Acosta, who rushed for 100 yards and scored two touchdowns. He also led Chaparral (4-3, 3-1 Sunrise) in receiving with 57 yards and one touchdown.

The loss dropped the Eagles to 4-3 overall and 2-2 in the league. Boulder City is in fourth place in a league in which four teams reach the playoffs.

Because of wins against Del Sol and Sunrise Mountain, the Eagles are alive and can improve their playoff seeding with a victory against Moapa Valley at 7 p.m. Friday in Overton. It is the homecoming game for the Pirates, who are in first place in the league with a 4-0 record.

The Pirates are 7-0 overall and have not lost to Boulder City in 15 years.

The Eagles’ final game is at home Oct. 24 against Virgin Valley. A victory in that game would earn the Eagles the No. 4 playoff seed and an opening-round game Oct. 30 on the road against the No. 1 seed from the Sunset League in the Division I-A Southern Region. Spring Valley (5-2, 4-1 Sunset) is in first place in the Sunset, with four teams tied at 3-2.

A victory Friday against Moapa Valley could enhance the Eagles’ playoff status.

“We are going to play hard and make a run,” senior quarterback Trenton Carmell said. “Except for this past game, we have been in each game with a chance to win in the fourth quarter. We have the ability and a team that wants to make the playoffs. It’s a matter of doing it. It starts again this week.”

It was the first game back for senior Brooks Roe, who missed the past two with an ankle sprain. He had 11 carries for 46 yards and four receptions for 17 yards. On defense, he made three tackles. At halftime, Roe was named homecoming king.

The Eagles’ defense was led by Jurgschat, who made six solo tackles and assisted on three. Austin Shepard made four tackles and two assists, while Devin Reese totaled four tackles. Jack Rozycki added two tackles and had three assists.