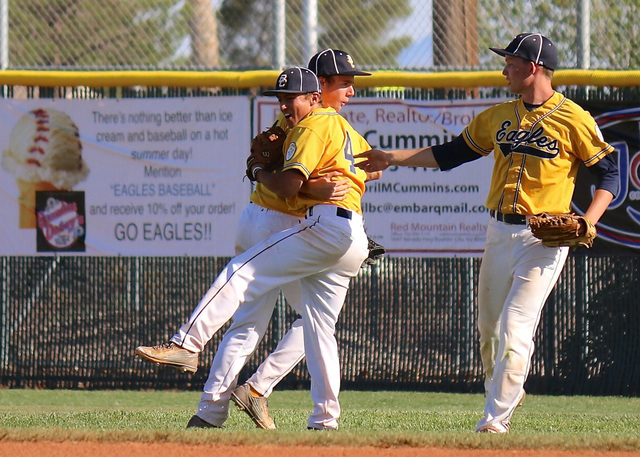 Several key moments fueled Boulder City High’s baseball team conference this past week, putting up double-digits runs in three of its four games. More importantly, however, it was the game in which the Eagles didn’t produce double-digit runs, in a 6-0 road victory over Chaparral, that provided the team with its biggest moment of this past week’s four-game series.

“Beating Chaparral is a huge conference win for us and it put us into first place,” senior Steve Wagner said. “They are a solid team and we played well, even though our bats weren’t all there, we had outstanding defense and I was proud of how we played.”

With the road victory Friday, the Eagles now have a two game lead over the Cowboys in the Division I-A Sunrise conference race heading into the final stretch of league play.

“It’s huge for our team and it shows that all of our hard work is paying off,” Wagner said. “Now that we’re in first place we have to work even harder and play even better to stay there and get ready for playoffs. I feel winning this one on the road sends a message across the board, not only to our league but to the other side as well. It shows that we are a good team and no matter where we are at we can play and compete and it’s an exciting thing to watch. I’m really excited to see what the future holds for this team.”

Pitching an absolute gem against the Cowboys, Wagner threw a complete game shutout against Chaparral, striking out five batters while only allowing three hits.

At the plate, senior Alec Mathis and junior Aaron Kehoe each added a pair of runs batted in for the Eagles, while senior Michael Morelli batted one-for-two with an RBI double.

“I thought we had a great week,” head coach Bobby Reese said. “We are 7-0 halfway through league with a two game lead. It’s important that we stay self-motivated and not be happy with just winning. We need to continue to win, but also play better in every game. Be hard on ourselves wanting to improve on little details. Those small things will be very important come playoff time.”

Snagging a trio of double-digit victories over the week, the Eagles routed Southeast Career Technical Academy 10-0 April 6, Pahrump Valley 10-0 Saturday and Moapa Valley 11-0 Monday on their way to a perfect week. Still the team’s core players feel that the Eagles have multiple opportunities to get better heading into the final stretch.

“We are looking strong right now, but there are still some things we need to improve on before regionals,” senior Peyton Koopman said. “If we get to the level I know we are capable of, we will have a very good chance at going to state and even winning state.”

With the upcoming game against Division I opponent Palo Verde on Monday, the Eagles will get a first-hand look at the type of team they can become, with one of their toughest matchups on the horizon.

“We are very excited to play Palo next week,” Wagner said. “They are a good Division I team and it helps us get prepared for playoffs that are coming up around the corner. We have to play hard and play as a team, and everything else will fall into place. This will be a good game for us and it will help us see where we’re at and get ready for playoffs.”