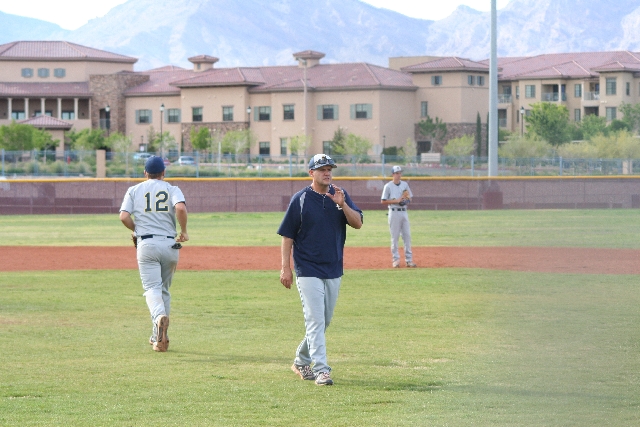 The 12-1 win came against rival Moapa Valley — the school that eliminated Boulder City last season — and Ragone was able to be on the field.

“That’s been a rivalry since freshman year,” said Ragone, who missed his junior season with an injury. “All the crap talking that goes on Facebook, we just take it to them on the field. So it was nice to knock them out.”

The win against the Pirates in the 1-A Southern Region loser’s bracket final at Faith Lutheran clinched a spot in the 1-A state tournament, which starts today at the College of Southern Nevada at Foothill.

Ragone had two hits and scored two runs in the game. The team was led by senior Tanner Howell, who tossed a two-hitter and struck out eight in the five inning game. Howell added a two-run triple in the game.

“We wanted (to play) Moapa so we could get the sticks on them early,” Barth said. “Just roll them and embarrass them like we did.”

Although Boulder City (22-9) lost in the finals 13-3 to Faith Lutheran on Friday, the team did not throw its top two pitchers — Howell or freshman Peyton Koopman — with a state berth already secure.

The Eagles will face Northern Region champion Elko at 11:30 a.m. today in the double elimination tournament. The winner will play the winner of the Faith Lutheran/Truckee game at 9 a.m. Friday. The losers play at 2 p.m. today.

Ragone, who normally plays first base but started on the mound against Faith Lutheran, said the team believes it has enough pitching behind Howell and Koopman to win.

“Any tournament will hurt a pitching staff,” Ragone said. “As long as you can get guys to throw strikes and hit some spots, then we should do just fine.”

Barth, the team catcher who also pitches, said it will come down to who on the team “shows up to pitch.” Barth said it might come down to the left-throwing Ragone.

“If he wants to throw some strikes that day, he’s going to come in and deal,” Barth said. “We need everything to click. We can’t make mistakes. We can’t give anyone an inch.”

Boulder City is hoping to win its seventh state title and first since 2006.

The high expectations this season for the Lady Eagles softball team came to an end with a slow roller to second base on May 9.

It also may have been the final play of a 20-year coaching career — the past 11 as head coach of the Lady Eagles — for Bruce Reid.

“I am trying not to make a decision this week in the wake of the season-ending loss,” Reid said. “I will give it a few weeks to mull it over and then decide.”

Boulder City’s season ended on a Faith Lutheran slow roller to second base with one out and a runner on third in the bottom of the seventh inning, giving the Crusaders to a 6-5 victory in the losers’ bracket final of the 1-A Southern Region at Faith Lutheran.

The Lady Eagles ended the season at 27-9. Senior Kasey Ochoa was 3-for-4 in the game, one which Reid entered already thinking that it could be his finale.

“It may just be the right time (to retire),” Reid said Monday. “It was just a very, very long season; longer than I expected. We never became the team I had hoped. It was frustrating at the end, especially losing two games in the Southern Region that I believe we should have won. I don’t want to decide just yet, in the disappointment of these two losses. Let’s see what a few weeks will change, or not change.”

The Lady Eagles’ elimination in the region tournament marks the first time in seven years that they did not qualify for a state tournament.

“I’m not use to not playing in the state tournament,” Reid said. “I am disappointed as I know our girls are very much. But it was in our hands, and we just made too many errors.”

Boulder City, the No. 1 Sunrise League seed, lost to Chaparral 3-1 in winners’ bracket final May 8.

In the Faith Lutheran game, the Lady Eagles took a 5-3 lead into the bottom of the seventh inning, However, consecutive walks allowed the Crusaders to begin a rally. A groundout advanced the runners to second and third, and a double off the fence in left-center tied the game, 5-5.

“Errors and walks allowed Faith Lutheran to score several runs,” Reid said. “We just didn’t play well when we needed to play well and they eliminated us.

“No excuses, but we had some sick players and made too many mistakes,” Reid said. “We played as much a role in eliminating ourselves as our opponents did.”