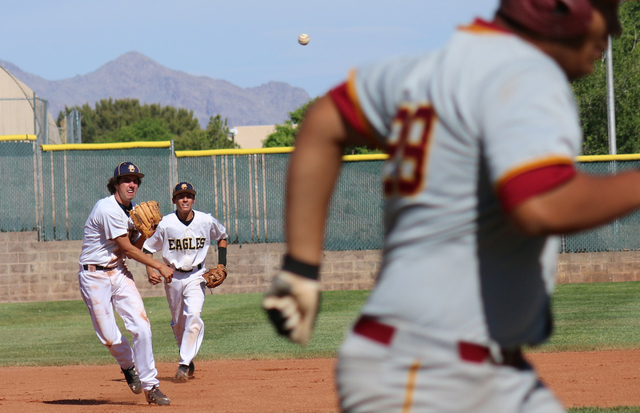 As the season nears its end, the Boulder City baseball team has one goal in mind: win the league title for top seed in the playoffs.

They secured the first seed in the playoffs after battling Southeast Career Technical Academy Wednesday afternoon, leaving the matchup with an 8-0 victory. The Eagles are 12-0 in league play and 19-8 overall.

“It’s gonna be a real good game,” head coach Bobby Reese said late last week. “It’ll be fun to watch, and a fun game to be a part of. And it’s a game that could go either way. We just got to play our game and see what happens.”

And play they did.

Koopman allowed only one hit in the five-inning game. He struck out five and walked five, as well as going 1-3 with two RBIs.

Austin Shepard was 2-for-3 with three RBIs, and Nolan DeSantis and Austin Wishard each had two hits and two runs for Boulder City.

Steve Wagner pitched his third complete game of the season while striking out one. The Eagles backed their pitcher with great fielding and swings, Reese said.

“We played very good defense,” Reese said. “They put a lot of balls in play, we didn’t have any errors. That’s what we need going in, so that’s a good sign. (Wagner) didn’t have a lot of strikeouts today, so we had to make plays today.”

“I finally got hot the second half,” Koopman said. “The first half was a little slow for me, but I made some adjustments and did pretty good this half.”

After the Eagles’ victory, they made the long trip to Pahrump for a Saturday game. Reese said Pahrump was a quality opponent, making the game a good test to see where his team stacks up as it nears the playoffs. Boulder City won the game, 4-2.

Nick Giunta pitched six solid innings before Zach Murphy came in to finish in relief. Together they struck out five and allowed only two hits.

Koopman had two RBIs, and Kermode had one. The Eagles had 11 hits.

Boulder City traveled to Virgin Valley on Tuesday and won 20-3.

Koopman and Garvin each brought in two RBIs.

“I don’t want them to be satisfied, and I’m not satisfied,” Reese said. “This is a team that can make a run in the playoffs, and that’s what we need to do.

“Next week is a big game. We need to get ourselves a good seed in the playoffs, and hopefully if you get that one seed, you get possibly two home games in the playoffs and that would be huge. That’s our first goal to get that done, and that’s going to come down Wednesday.”